Read Sandbag’s feedback to RePowerEU on the European Commission’s website.

We welcome immediate action to reduce Europe’s dependency on Russian fossil fuels in the face of its aggression against Ukraine. However, the European Commission’s proposal reflects the impossibility of meeting this objective while keeping conflicting incentives in force.

The REPowerEU plan aims to mobilise €210bn in public funds, mostly taken from unspent existing budget lines such as the EU’s €800bn COVID-19 recovery fund. To these, only €20bn new funds are added, raised from the auctioning of EU ETS allowances held in its Market Stability Reserve (MSR). 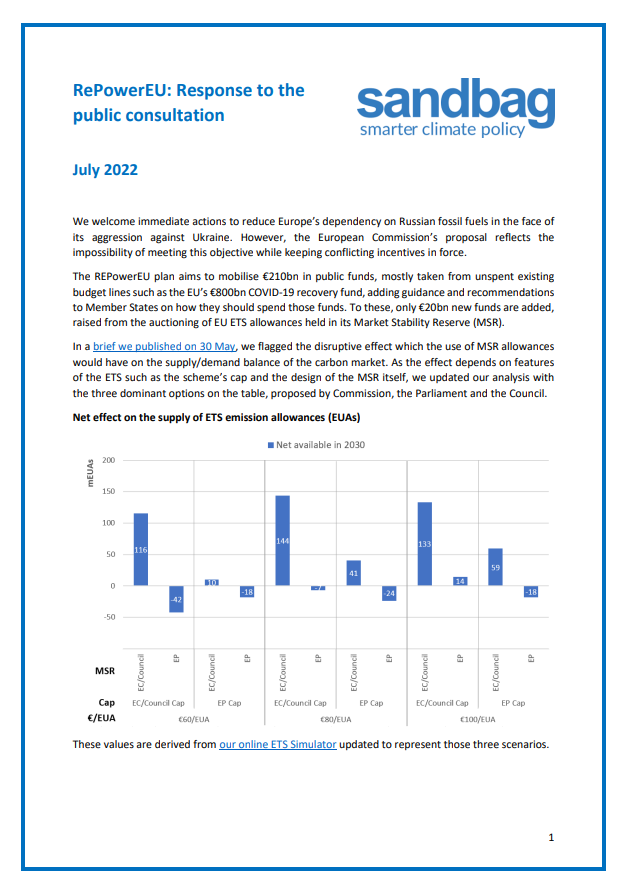 In a brief we published on 30 May, we flagged the disruptive effect which the use of MSR allowances would have on the supply/demand balance of the carbon market. As the effect depends on features of the ETS such as the scheme’s cap and the design of the MSR itself, we updated our analysis with the three main design options on the table, proposed by Commission, the Parliament and the Council. In all scenarios under the Commission and Council design options, the REPowerEU plan leads to 116-144 million additional supply of EUAs, all of which is ‘available in circulation’, whereas it slightly reduces the supply under the Parliament’s proposal. 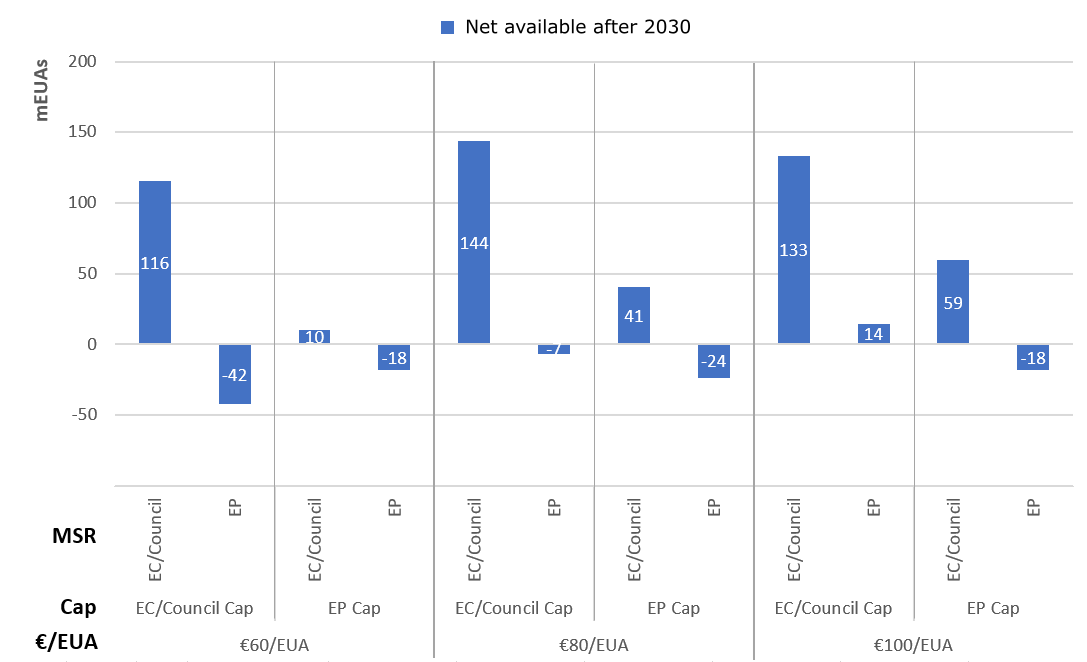 These values are derived from our online ETS Simulator updated recently to represent those three scenarios.

Money money everywhere, but not a euro to decarbonise

Beyond the illusory effect of resorting to the MSR, the overall EC proposal lays bare a much larger shortcoming of the emissions trading scheme: despite creating assets worth a trillion euros, it does not make any funds available to decarbonise the industries it covers.

This is because of the way the value of the emission allowances is split between entities and spent. Of a total value of €1.1tn over 2021-30 (assuming a carbon emission price of €100 per tonne), about half is allocated for free to emission-intensive industrial plants. Of the other half (mostly covering the power sector, but also airlines and shipping), up to €150bn can be spent by Member States to power-intensive industries as compensation for indirect carbon costs. This compensation applies to the use of grid electricity but not to the use of renewable electricity directly sourced with power purchase agreement.

Another 69-83bn will be auctioned by the European Commission to fund the Innovation Fund (to be renamed ‘Climate Investment Fund’ according to the Parliament’s proposal). The remainder is split between the EU budget, Modernisation Fund, and Member States. 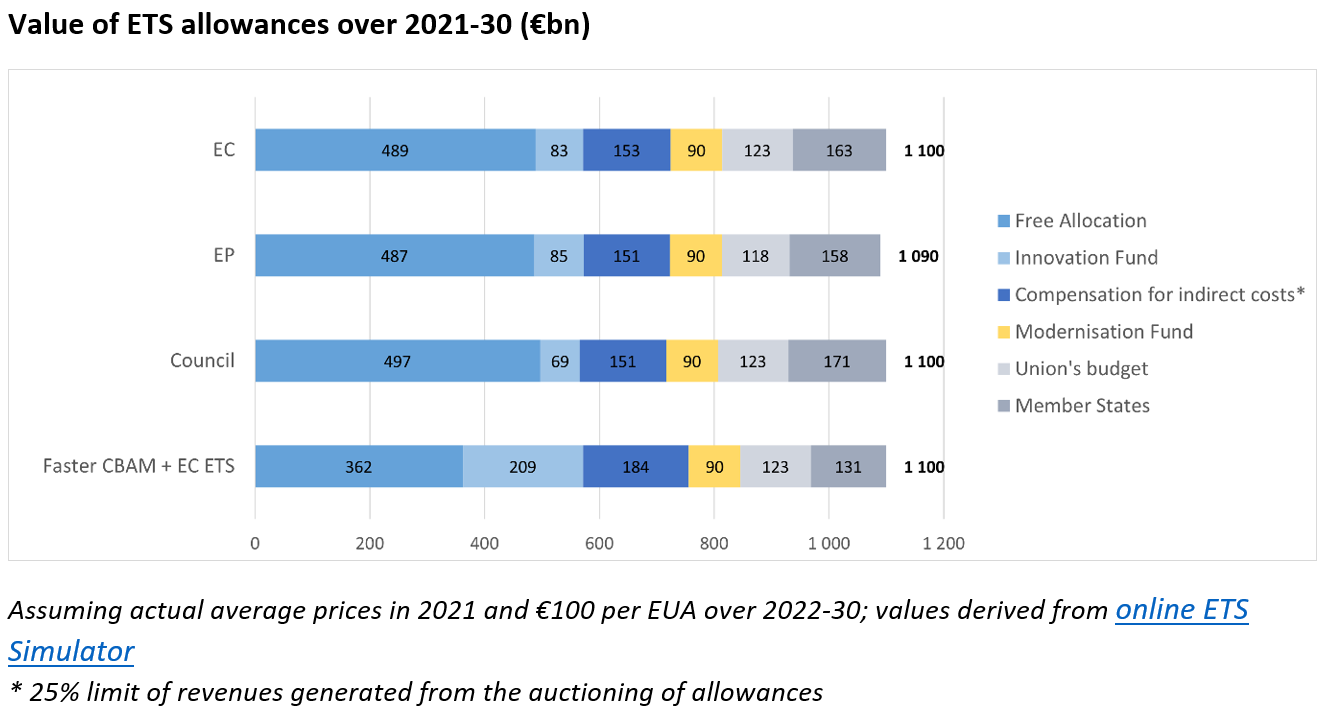 A reallocation of the carbon market’s value would be by far the most efficient way of reducing Europe’s dependance to fossil fuels.

As we have found in previous reports, the free allocation of emission allowances is an obstacle to decarbonisation, innovation and the good functioning of the carbon market, so every possible means should be used to put an end to it and make it a very last recourse after trying all other options. The more value is allocated to emission-intensive plants, the more costly it is to make alternative products competitive.

The various proposals for a gradual phase down of free allocation for CBAM-covered sectors lead to only slow and marginal corrections in the incentives to low-carbon processes. Applied just to those sectors, a faster phase out would free up another 135bn euros (see ‘faster CBAM’ scenario, which assumes full implementation in 2024). This would increase even further if free allocation was also abolished in some non-CBAM sectors such as hydrogen or plastics, where product requirements or consumption taxes could be applied instead.

Besides the financial benefit, the largest gain from abolishing free allocation is its ability to break the current barriers to the development of a low-carbon economy.

Support at any indirect cost

Another necessary change regards the granting of indirect cost compensation to power-intensive industries. Current state aid regimes neutralise any extra cost caused by the use of carbon-intensive grid electricity instead of, for example, the entering into renewable power purchase agreements. Although renewable energy is generally cheaper per MWh, its use by industrial facilities typically increases capital and operational costs due to reduced and less predictable operating hours.

Unconditional support for the use of carbon-intensive electricity is environmentally wrong as much as detrimental to any shift in industry’s power consumption patterns. It will surely contribute to creating power shortages at peak hours, and increase the likelihood of authorities resorting to highly damaging arbitrary power cuts.

While the ETS does not raise funds for decarbonisation, it does for innovative project-based initiatives. The Innovation Fund (to be renamed Climate Investment Fund according to Parliament’s proposal) rewards individual projects based on their degree of innovation and ability to decarbonise.

This approach may grant funding to projects such as CCS or large scale electrolysing facilities sponsored by private investors using available infrastructure with profit-making objectives. However it would not fund non-project based investments in infrastructure such as the power grid, scrap recovery schemes, re-use measures or even feed-in tariffs to support renewable energies in Member States (some of which do not have any kind of support scheme).

Although the Innovation Fund is inappropriate to tackle Europe’s dependence to fossil fuels, it is receiving impressive amounts of funding. We recommend to reform the Fund to direct its spending on decarbonisation activities beyond the project financing paradigm.

Photo by Patrick Hendry on Unsplash