Why Free Allocation in the EU ETS Must Stop Urgently

Why Free Allocation in the EU ETS Must Stop Urgently

Free allocation (FA) under the EU ETS has been criticised for directing large amounts of taxpayers’ money towards incumbent polluting plants, turning the polluter-pays principle on its head and not being sustainable in the long run. It also creates competitive distortion between production processes.

In its Fit for 55 package, the European Commission has proposed to mitigate the negative aspects of FA by proposing several measures such as the Carbon Border Adjustment Mechanism, conditionality criteria on FA, extending the Innovation Fund’s mandate (with carbon contracts for difference), promising a reform of the benchmarks in 2026, and extending the ETS scope to a few more production processes. Although Sandbag welcomes the Commission’s intention, its proposals are not ambitious enough (e.g. extending FA until 2035), which suggests that the problems it creates have not been considered at their full scale. 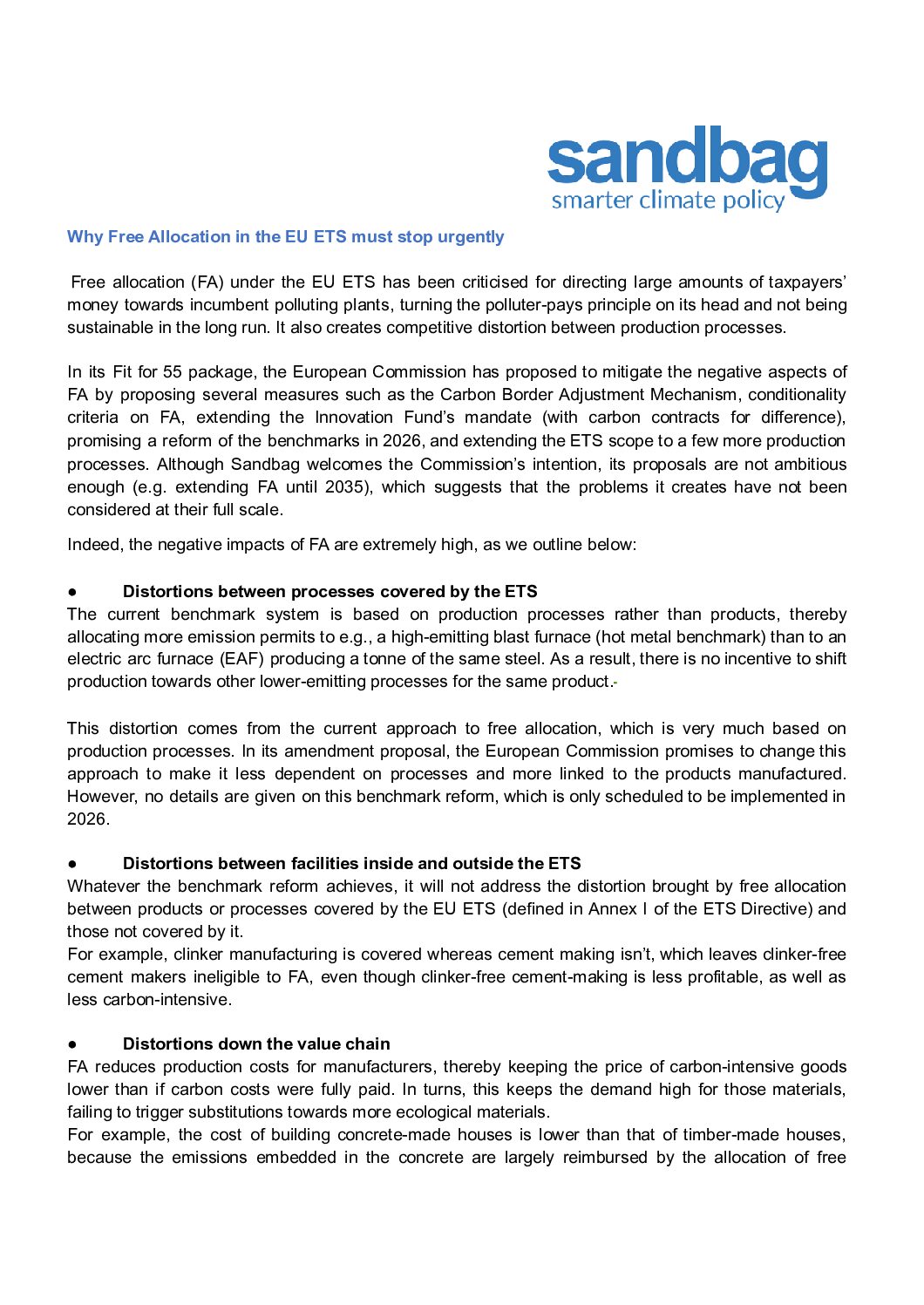 Indeed, the negative impacts of FA are extremely high, as we outline below.

The current benchmark system is based on production processes rather than products, thereby allocating more emission permits to e.g., a high-emitting blast furnace (hot metal benchmark) than to an electric arc furnace (EAF) producing a tonne of the same steel. As a result, there is no incentive to shift production towards other lower-emitting processes for the same product.

This distortion comes from the current approach to free allocation, which is very much based on production processes. In its amendment proposal, the European Commission promises to change this approach to make it less dependent on processes and more linked to the products manufactured. However, no details are given on this benchmark reform, which is only scheduled to be implemented in 2026.

Whatever the benchmark reform achieves, it will not address the distortion brought by free allocation between products or processes covered by the EU ETS (defined in Annex I of the ETS Directive) and those not covered by it.

FA reduces production costs for manufacturers, thereby keeping the price of carbon-intensive goods lower than if carbon costs were fully paid. In turns, this keeps the demand high for those materials, failing to trigger substitutions towards more ecological materials.

For example, the cost of building concrete-made houses is lower than that of timber-made houses, because the emissions embedded in the concrete are largely reimbursed by the allocation of free emission permits. This incentive locks the building sector in its current practices, over-specifying concrete use and dismissing much better alternatives that are economically not viable.

A solution sometimes proposed is to add more products or processes to the EU ETS, to let other facilities benefit from free allocation and compete more fairly with those that are. This is what the Commission is proposing with hydrogen manufacturing, by including any type of hydrogen production (not just from steam methane reforming and partial oxidation like currently).

Obviously, this approach would use more allowances, which must be taken away from other sectors or from reserves such as the NER, thereby watering down the cap. But it also creates more distortions, as the extension of the ETS creates a great deal of bureaucracy. In practice, only large plants can be covered by the scheme, which is reflected in the eligibility threshold proposed for hydrogen facilities, of at least 25 tonnes of daily hydrogen production capacity. For renewable hydrogen, such production level can only be achieved by electrolysers of about 100MW, which is 100 times the average size of electrolysers currently operating. Whatever the threshold, free allocation will distort competition between large and small production facilities.

Free allocation is generally granted in proportion to a plant’s output. This benefits reductions in the carbon intensity of specific processes that don’t involve a reduction of output. In contrast, it disqualifies any emission reduction measures involving waste reduction, improved product specification, product reuse or recycling, the economics of which are currently not viable. This is a major issue, as a recent report[1] showed that by 2050, 50% of emissions reduction in the EU’s steel sector could be achieved through increased recycling and higher material efficiency measures.

Rewarding the production of goods with free allowances is likely to lock in wasteful production and consumption patterns and extending the scope of the ETS (as proposed for hydrogen production) is likely to make the problem even worse.

An intermediary product such as hydrogen is only useful to society if used in ways that avoid emissions, but there are uses of hydrogen that could lead to an actual increase in emissions. For example, producing hydrogen from grid electricity (increasing the demand for gas-powered electricity) and pumping it into the natural gas grid would just add up to a lot of conversion losses. In a context of high natural gas prices and high carbon prices, such absurd activity could become profitable if free allocation was granted to all hydrogen production!

By locking in high-emission production patterns, free allocation keeps industry emissions artificially high, and any market-driven future emission abatement very limited. This in turn keeps the demand for emission permits high, and their market price higher than would be necessary to meet the cap without the negative incentives created.

In addition, free allocation based on production output creates uncertainty on the supply of allowances available in the market. For no good reason, emission reductions caused by reduced output (e.g. in a high circularity scenario) would reduce the supply of permits (and boost their price) compared to a scenario of equal reduction caused by e.g., efficiency improvements. The annual cap gives no certainty on the supply of allowances, making price forecasts increasingly difficult.

In summary, FA is a major obstacle to innovation, to industrial decarbonisation and to the well-functioning of the EU’s carbon market. For the reasons outlined, a rapid phase-out of FA is required. Above all, it is crucial that all other options are assessed before resorting to FA – it should be avoided wherever possible and treated as a last resort.

Photo by EJ Yao on Unsplash