RePowerEU: Fiddling with the Carbon Market puts the Climate at Risk

RePowerEU: Fiddling with the Carbon Market puts the Climate at Risk

The European Commission’s plan to raise revenues from the Emissions Trading Scheme (ETS) increases the risk to exceed the market’s emission limit.

On May 18th the European Commission announced a plan to use Europe’s carbon market to help finance investment needed to wean the EU off Russian fossil fuels. The €210bn RePowerEU Plan mostly dresses up existing budget lines such as the EU’s €800bn COVID-19 recovery fund, adding guidance and recommendations to Member States on how they should spend those funds.

One budget source comes as a surprise though, as the Commission proposes to provide Member States with €20 billion raised from auctioning allowances from the EU ETS held in the Market Stability Reserve (MSR). 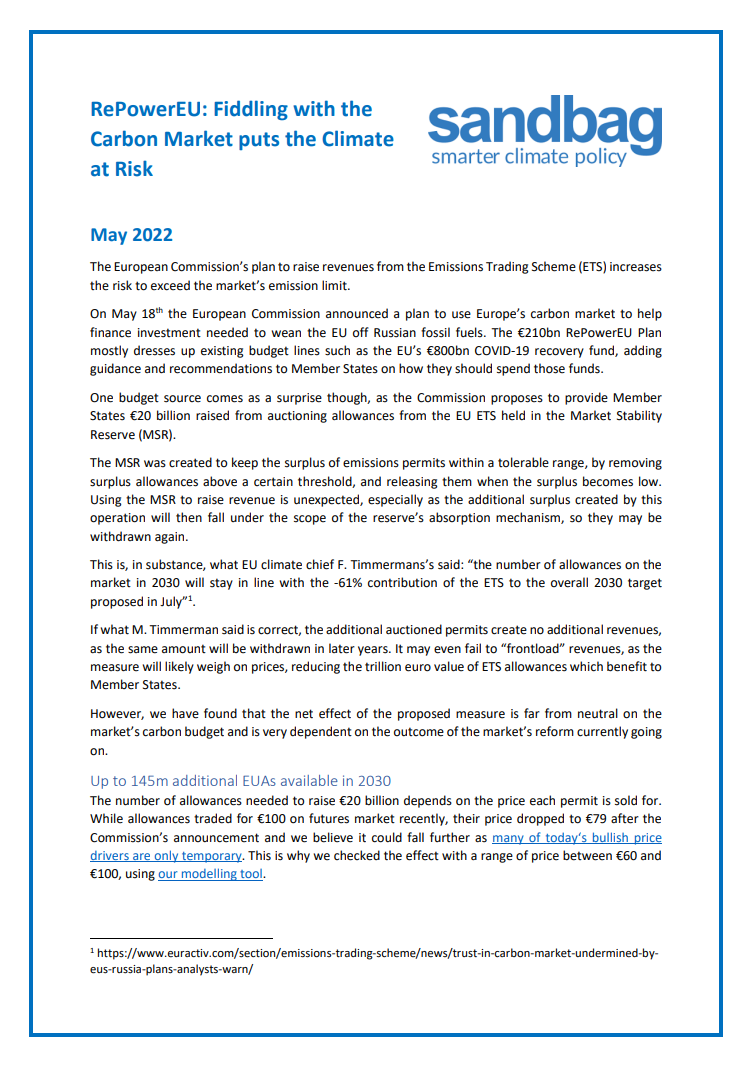 The MSR was created to keep the surplus of emissions permits within a “tolerable” range, by removing allowances above a certain surplus threshold, and releasing them when the surplus becomes low. Using the MSR to raise revenue is unexpected, especially as the additional surplus created by this operation will then fall under the scope of the reserve’s absorption mechanism, which may withdraw them again.

This is, in substance, what EU climate chief F. Timmermans’s said: “the number of allowances on the market in 2030 will stay in line with the -61% contribution of the ETS to the overall 2030 target proposed in July” [1].

If what M. Timmermans said is correct, the additional auctioned permits create no additional revenues, as the same amount will be withdrawn in later years. It may even fail to “frontload” revenues, as the measure will likely weigh on prices, reducing the trillion euro value of ETS allowances which benefit to Member States.

However, we have found that the net effect of the proposed measure is far from neutral on the market’s supply/demand balance and is very dependent on the outcome of the reform currently going on.

Up to 198m additional allowances in circulation available in 2030

The number of allowances needed to raise €20 billion depends on the price each permit is sold for. While allowances traded for €100 on futures market recently, their price dropped to €79 after the Commission’s announcement and we believe it could fall further as many of today‘s bullish price drivers are only temporary. This is why we checked the effect with a range of prices between €60 and €100, using our online modelling tool.

The scenarios shown below represent different designs of the market as proposed by the European Commission (in July 2021) and the Parliament’s ENVI Committee on 17th May. 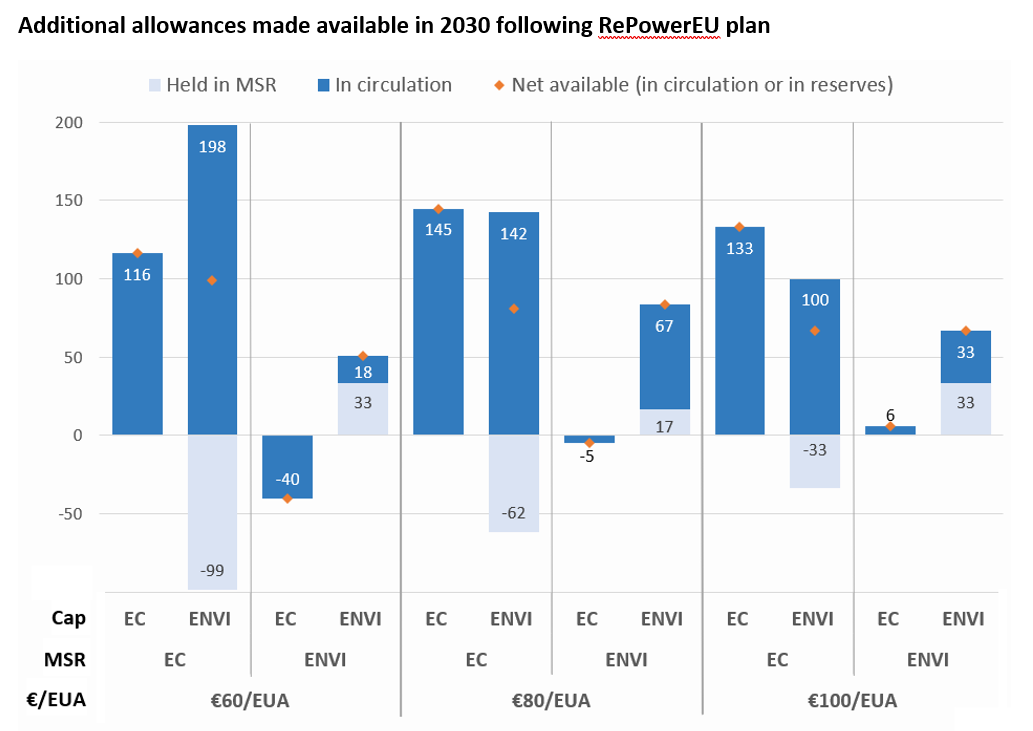 The model runs show that, in most cases, the MSR only partly re-absorbs the permits added by RePowerEU. The EC’s proposed measure results in up to 200m emissions permits being in circulation by 2030, which allow industries and airlines to exceed the scheme’s emission limit by that date. When netting together the allowances in circulation and those still held in the MSR, up to 145m would be added by the EC’s plan.

Better use of ETS Revenues

The effect on the supply-demand balance comes in a market which is far from undersupplied. In fact, we forecast that, in a ‘business-as-usual’ emissions scenario for industry, there will be 842m allowances still available by 2030, including 157m in circulation. In those conditions, adding up to 200m allowances in circulation (more than double the amount in 2030) could have a very significant impact on prices and on the value of the revenues raised from auctioning them.

A better way to finance the RePowerEU plan would be to reduce the free allocation of emission permits to industry, possibly by extending the scope of Carbon Border Adjustment Mechanism (CBAM). The €20bn sought by the Commission only represent 2% of the value of the allowances over the decade, and such measure would not create a supply flood as the Commission’s plan would.

More generally, the EC’s plan reflects the lack of mechanism for ETS revenues to finance industrial policies at EU scale. The main EU-managed investment vehicle funded by those revenues, the Innovation Fund, is limited to project-based individual initiatives and to innovative technologies, which falls way short of implementing any kind of industrial policy. We had raised this problem in a previous communication and in our proposed amendments to the Parliament. Now is the opportunity to make the necessary changes.

Photo by Ibrahim Boran on Unsplash