EU ETS Revenues: Who Receives What? The Trillion Euro Question

EU ETS Revenues: Who Receives What? The Trillion Euro Question

This brief gives an analysis of the EU ETS Revenues, and aims to highlight, under various scenarios, how much is allocated to industry, Member States, and the Union’s budget respectively. The European carbon market, currently under review, will likely generate emission allowances worth over a trillion euros over 10 years, which is more than the EU’s entire recovery budget.

Therefore, the question becomes ‘who should receive what?’ as currently, of this substantial sum, the largest part is given for free to industrial installations as protection against carbon leakage. Accordingly, in this brief we outline the drawbacks of the current system, and propose an alternative scenario where revenues can be utilised to ensure large-scale emissions reductions. 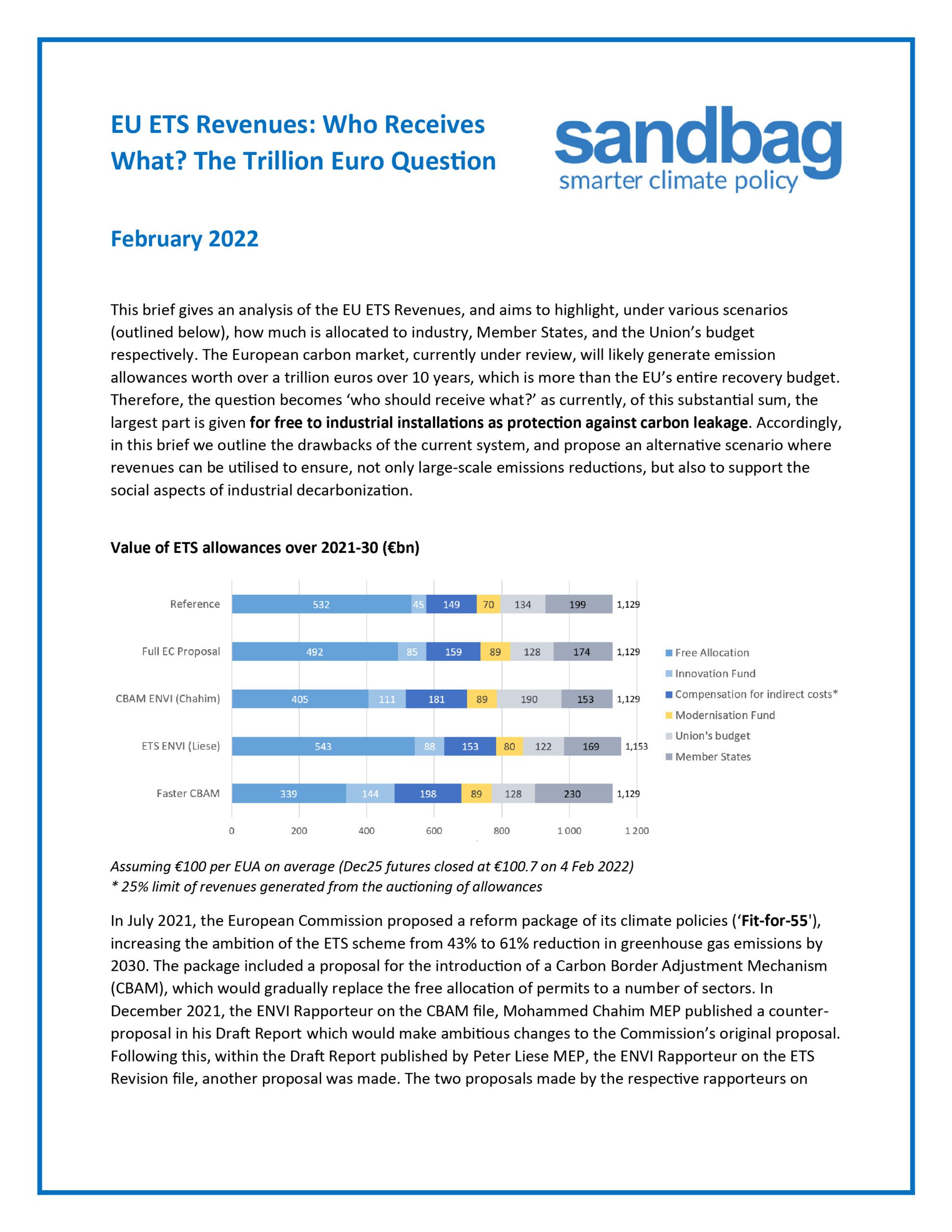 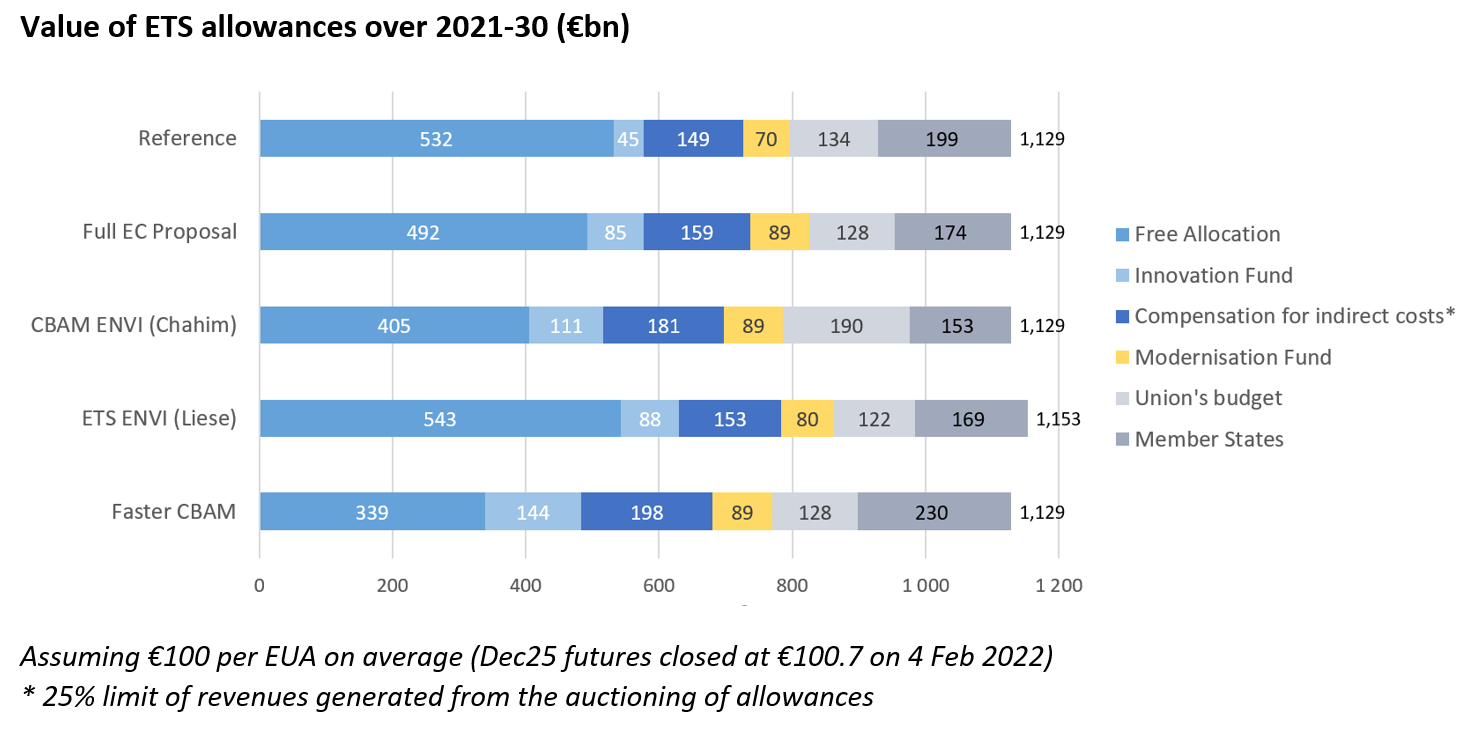 In July 2021, the European Commission proposed a reform package of its climate policies (‘Fit-for-55‘), increasing the ambition of the ETS scheme from 43% to 61% reduction in greenhouse gas emissions by 2030. The package included a proposal for the introduction of a Carbon Border Adjustment Mechanism (CBAM), which would gradually replace the free allocation of permits to a number of sectors. In December 2021, the ENVI Rapporteur on the CBAM file, Mohammed Chahim MEP published a counter-proposal in his Draft Report which would make ambitious changes to the Commission’s original proposal. Following this, within the Draft Report published by Peter Liese MEP, the ENVI Rapporteur on the ETS Revision file, another proposal was made. The two proposals made by the respective rapporteurs on each file (ETS Revision and the CBAM) do not align on several aspects, including the handling of the ETS and CBAM revenues.

The above chart gives the estimated revenues for each of these scenarios, with a carbon price of €100/EUA. A detailed description of the scenarios is given in the brief and results can also be seen in our ETS Simulator.

Under the current system, up to 43% of the emission cap can be distributed each year to industry (the rest being sold by Member States or the Commission to raise revenues). However, additional reserves of allowances can be used to increase that share: up to 3% of the cap (the “buffer”) can be used if industry needs it; the New Entrant Reserve can release up to 320m permits in excess of that limit.

The permits that are not given for free to industrial installations (and airlines) are sold or auctioned by the European Commission (via the EIB) or by Member States. A share of the proceeds is dedicated to the Modernisation Fund for poorer Member States to upgrade their energy infrastructure; another share is for the Innovation Fund. In a separate legislative proposal, the Commission is proposing to allocate 25% of the remaining funds to the Union budget to repay the recovery package, and the remainder to Member States. Of this last share, part is spent by Member States to support their industry, as compensation for indirect carbon costs.

This revenue waterfall is slightly different between legislative proposals, as summarised below:

All scenarios foresee EUR400-550bn worth of allowances given for free to industry, indicating that, despite some differences, free allocation remains the dominant protection against carbon leakage. This is despite the multiple obstacles created by free allocation to industrial decarbonisation and a well-functioning carbon market, as we warn in another note. Of all the proposals, the CBAM ENVI proposal goes the furthest towards tackling these issues, by removing free allocation from more sectors covered by the CBAM, although still too slowly to make a big enough dent.

Pursuant to the ETS Directive, Member States also have the option to support their electricity intensive industry in the form of state-aid compensation for indirect carbon costs. The limit is set at 25% of allowance revenue, although some derogations exist. The actual percentage in 2019 and 2020 was 8% and 14% across the EU, but there could be an uptick as electrification intensifies in the continent. As a result, only a small portion of the value created by the EU ETS is to benefit Member States. Under all proposals, Member States are required to spend 100% of these revenues (as per the Commission’s proposal) on a list of climate-related measures such as adaptation, support to technology and forestry, but also “addressing social aspects”. “Promoting skill formation” is mentioned, but only as a social measure and not a decarbonisation instrument. Disappointingly, no mention is made of circularity.

A new addition in the different proposals is the use of free allocation as a tool to incentivise lower-carbon products and processes, by extending the scope of the ETS or even giving ‘bonus’ permits to ‘performant’ installations. The FF55 package will be followed in 2025 by a reform of the ‘benchmarks’, a list of coefficients used to determine the free allocation of permits to industrial installations, in proportion to their production output. That other reform may further increase the allocation of free permits to industry.

The carbon costs paid by manufacturers are typically (more than) recovered through higher prices charged for the goods they sell. For example, the market price of electricity is driven by the marginal cost of production, which typically uses fossil gas, so electricity prices include an element of carbon cost as if all electricity was produced from fossil gas. Higher power prices also make low-carbon electricity more profitable and encourage energy savings.

The free allocation of emission allowances was adopted for a list of sectors deemed less able to raise their selling prices by fear of foreign competition taking over instead: this is the theory behind carbon leakage. As a result of free allocation, the prices of industrial basic materials such as steel and chemicals remain low, which makes the carbon price less effective in changing consumption habits. Retail and industrial users keep consuming those goods as they always have, and the fundraising mechanism in place for electricity does not work for industrial manufacturing.

Therefore, we are asking to accelerate the implementation of the CBAM and phasing out of free allocation in sectors which do not face low-carbon competition from overseas on a large scale: for those sectors, a CBAM would not create any competitive disadvantage (maybe rather the opposite), and making it faster would:

We are also proposing that the extra revenues raised from reducing free allocation should not all go to the Innovation Fund in its current form, but rather support other types of initiatives:

The brief includes our proposed ETS amendments on revenue use.

Photo by Ibrahim Boran on Unsplash