Sandbag ETS Recommendations: How can the trialogues win a meaningful EU carbon price? 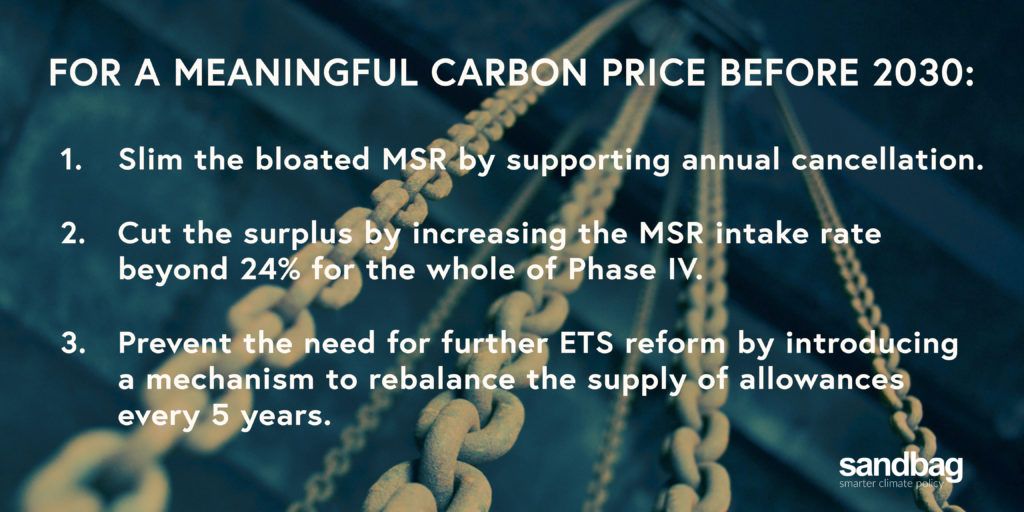 Since its creation in 2005, the EU Emissions Trading System (ETS) has been in a near constant state of crisis and reform. Since 2011, the carbon price has remained below €10 a tonne, unable to significantly influence investment decisions, and failing to drive the most cost-effective emissions cuts.

The final trialogue discussions in the latest round of carbon market reform are now approaching: these give us one more chance to push towards policy which would support a meaningful European carbon price, and step up Europe’s efforts to tackle climate change.

For a meaningful carbon price before 2030, the trialogue discussions on September 13th must:

1. Slim the bloated Market Stability Reserve by supporting annual cancellation. Supporting the European Council proposal prevents an enormous overhang of spare allowances building up over the system which would undermine confidence in the market. Without cancellation we predict the surplus in the MSR alone will be over 3Bt in 2025.
2. Cut the surplus by increasing the MSR intake rate beyond 24% for the whole of Phase IV. Without a faster MSR intake rate, the surplus on the market will be 1-2Bt in 2025, dependent on emissions assumptions. In Sandbag’s “low emissions” scenario (e.g. if coal plants close more quickly than expected) the market surplus will still be over 2Bt into Phase V.
3. Prevent the need for further ETS reform by introducing a new mechanism to rebalance the supply of allowances every 5 years. Building on elements of the two drafts, and in line with the Paris Agreement process, a five-yearly rebalancing would give the ETS long-term resilience to different emissions scenarios and economic cycles. Furthermore, no amendments currently proposed address the growing impact on the market surplus of overlapping policies for power sector emission reductions.

The rock-bottom carbon price (currently around €6) is not the only issue facing the ETS. Reforms should also:

Even with the Council proposal, the ETS remains oversupplied by 1-2Bt in 2025, suggesting no change in the carbon price

With market surpluses in the 2020s similar to today’s daunting size (1.7Bt) we would not expect to see a carbon price above €10. This isn’t good enough.

Recent reforms in California are showing how carbon pricing can work effectively, with prices above €12 and climbing. Meanwhile British Columbia’s €25 carbon tax is shortly to be expanded around Canada, and China is set to launch their own carbon market later in the year. It’s time for the EU to catch up, and start driving low-carbon innovation here.

Read more
Read more on our emissions forecast in Sandbag’s May briefing A tale of two surpluses
Read about our proposal for a five-yearly rebalancing mechanism in Sandbag’s June briefing: Creating a virtuous circle
Read more about why we need a Europe wide uniform legislation on investments in energy supply in our briefing on capacity markets: Capacity payments and 550g and check out Sharing the burden for why having a clear low-carbon investment criterion in legislation is more important than disputes on governance of the ETS low-carbon funds.