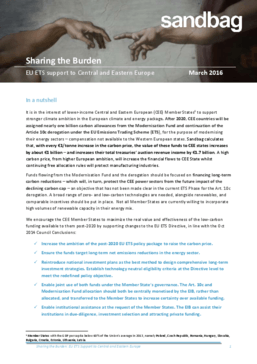 On 17 March, the European Heads of State met in Brussels, but the outcome of COP21 dropped off their agenda due to a strong opposition to increased 2030 climate ambition coming from lower-income member states. In today’s new briefing Sandbag explains that the post-Paris rise in climate ambition is actually in the interest of the lower-income Central and Eastern European economies after 2020.
The transition to a low-carbon economy in CEE countries can impose as much as €84 billion of additional investment burden on the CCE economies during 2021-2030. To ensure an even spread of the decarbonisation effort the EU Council agreed in Oct 2014 that CEE countries will be supported by special provisions from the EU Emissions Trading Scheme Directive allowing them to use additional carbon credits for investment in the decarbonisation of their energy sectors. The funds total nearly 1 billion carbon allowances.
Funds flowing from the Modernisation Fund and the Article 10c derogation should be focused on financing long-term carbon reductions – which will, in turn, protect the CEE power sectors from the future impact of the declining carbon cap – an objective that has not been made clear in the current ETS Phase. Significant support is needed to a broad range of zero- and low-carbon technologies, alongside renewables, and comparable incentives should be put in place.