According to Shipbreaking Platform, a Brussels-based NGO campaigning for the environmental and human rights issues linked to shipbreaking practices, in 2021 alone, 583 ocean-going commercial ships and floating offshore units with a total of 14 million gross tonnage [1] were sent to scrap yards on the beaches of Bangladesh, India and Pakistan. As mentioned in the Official Journal of the EU [2], more than one third of ships sent to these beaches each year are owned by European companies. Beyond the environmental and human impact, this trade flow contributes to an important problem for the European steel industry; a large quantity of raw materials is exported instead of being recycled on the continent. 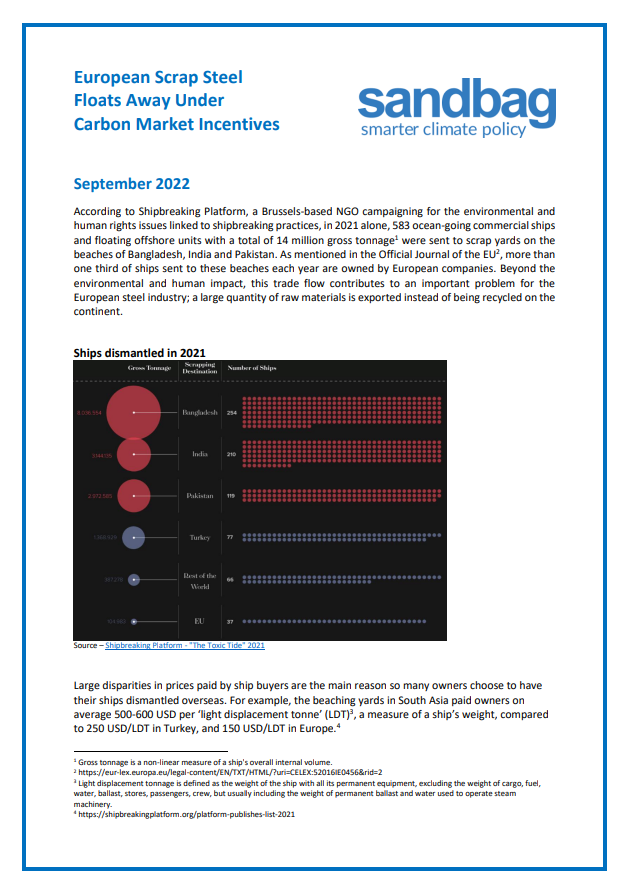 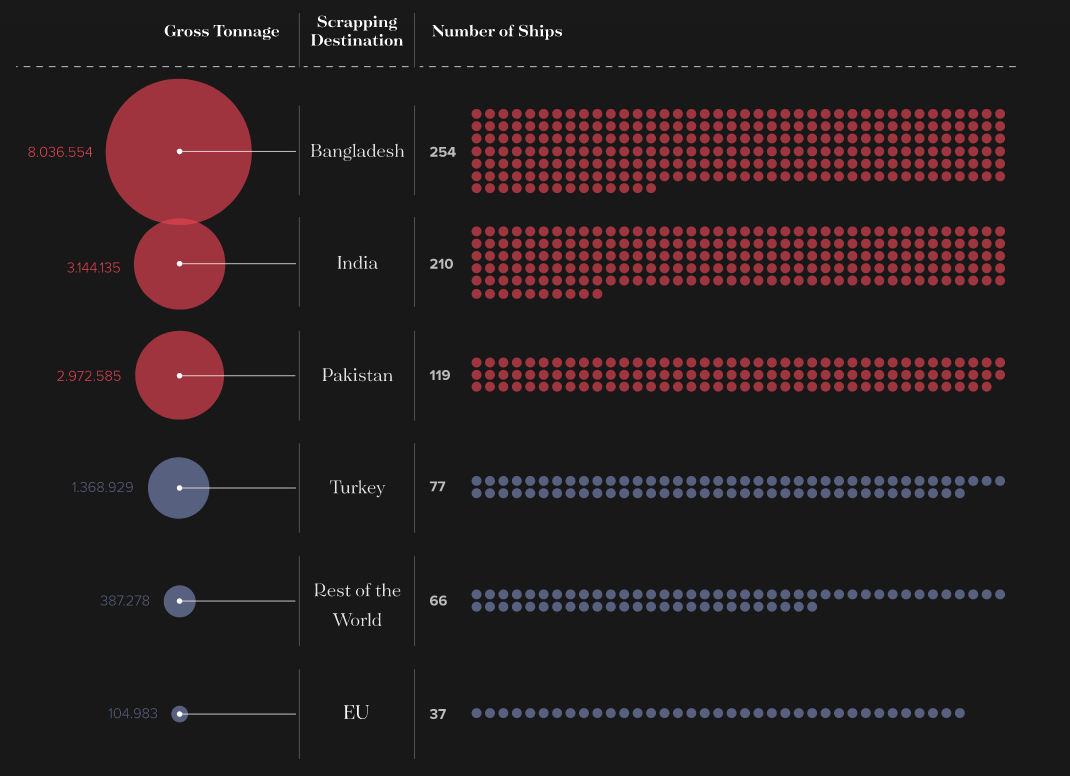 Large disparities in prices paid by ship buyers are the main reason so many owners choose to have their ships dismantled overseas. For example, the beaching yards in South Asia paid owners on average 500-600 USD per ‘light displacement tonne’ (LDT) [3], a measure of a ship’s weight, compared to 250 USD/LDT in Turkey, and 150 USD/LDT in Europe [4]. 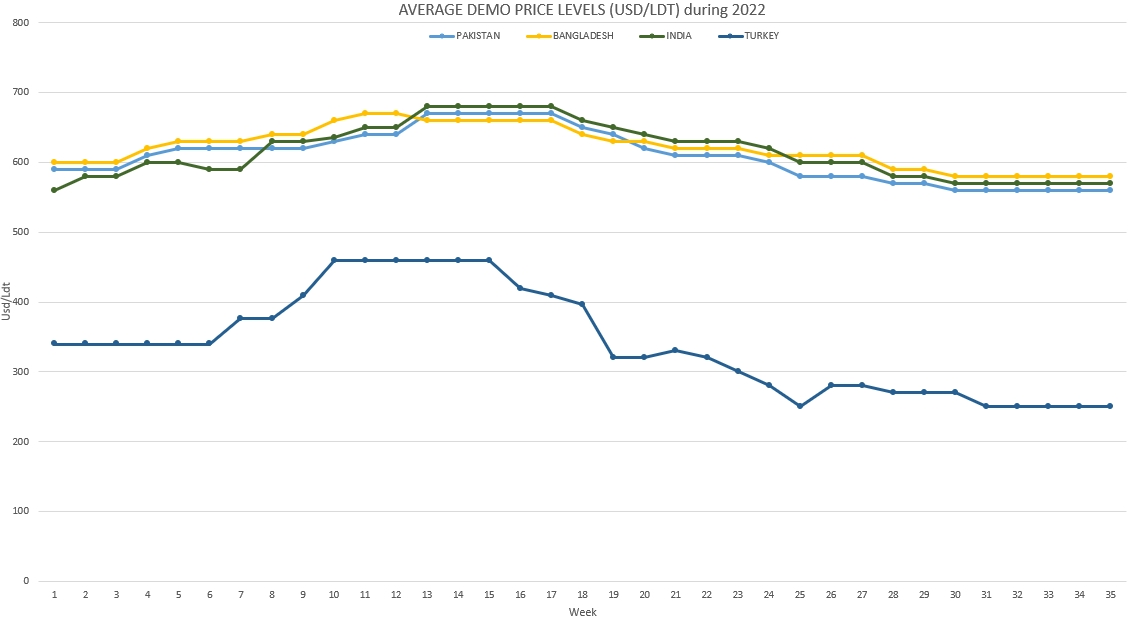 Though the recyclable steel content of a ship varies with type and size, estimates range from around 70% of the LDT for cruise ships to 90% for containerships and 95% for tankers, according to industry experts. Steel from end-of-life ships is known for its excellent quality, as it commonly contains single sheets of 20-30 tonnes of homogenous composition. By exporting this steel, Europe is missing out on precious raw materials that could otherwise be recycled in steel plants instead of producing primary steel from imported iron ore through carbon-intensive processes using (also imported) coking coal or natural gas.

Ships sold for dismantling add to Europe’s already booming exports of steel scrap. The European Union is the world’s number one exporter with net exports by the former 28-nation bloc totalling 20 million tonnes in 2020. This is largely due to lack of domestic demand, as the domestic steelmaking sites are unable to process the excess material. While a move towards EAF production facilities is urgent from an environmental point of view and would also allow European sites to process much more scrap steel, incentives created by the European carbon market are skewing the playing field.

Under the EU emissions trading scheme (ETS), free emission permits are given to EU-based steel plants, covering most of their emissions and sometimes more. But the allocation system, which is tightly linked to production processes, grants many more free allowances to high-emitting blast furnaces (BF-BOF route) than to lower-emitting electric arc furnaces (EAF). This advantage protects the current blast-furnace production facilities from the impact of the carbon price and removes the incentive to replace them with EAF.

Improvement could come from proposed legislation, with which free allocation for steelmaking will be phased down as a carbon border adjustment mechanism (CBAM) gradually ramps up to tax imported goods. However, this ramp-up is only proposed to happen gradually (by 2032 at the earliest).

Also, the CBAM regulation will not be able to cover all embedded emissions from steel imports. This is because input products used in steelmaking such as coking coal and sintered ore (called ‘precursors’ in Annex III of the CBAM regulation) will not be covered by the CBAM, which means that the EU-based plants making those precursors will keep receiving free allowances. The embedded emissions of precursors of imported goods cannot be charged a CBAM while EU plants making those same products keep receiving free emission permits, for obvious WTO compliance reasons.

While the emissions from upstream products of the blast furnace route will likely be exempt of a CBAM charge, this is not the case for one key precursor of steel products made from electric arc furnaces (EAF): direct reduced iron, which will be covered by the CBAM under all proposals. The blast furnace and the EAF production processes are therefore not treated equally.

As if this were not enough to ensure nothing more than an overall status quo for European steelmakers, the European Council has also proposed that the free allocation benchmark for blast furnaces (called ‘hot metal’) be exempt of any change in required annual reduction rates until 2030 that may result from a reform of the benchmarks scheduled for the near future [5].

Lack of demand for scrap steel is probably one reason why European ship buyers pay so little. The cost of higher standards on environment and human rights also influence price. However, there is hope.

Assuming that 1 LDT contains 0.75 tonne of scrap steel, the price difference between Turkish and European buyers of 100 euros per LDT (1USD = 1EUR) represents about 133 euros per tonne of scrap steel. A tonne of steel produced from a BF/BOF process (made of 80% primary steel on average) is awarded 1.66 emission allowances under the EU ETS, which means 2.07 per tonne of primary steel. At 68 euros per allowance (on 14 September 2022), this represents a subsidy of 140 euros.

Without free allocation and with a well-designed CBAM in place (to prevent imports from displacing domestic production), European steel prices would start reflecting marginal carbon costs, i.e., the costs borne by the least profitable plants (surely BF/BOF given the lack of alternatives). This should increase the market value of scrap steel, by an amount close to the calculated 140 euros, enough to make EU scrapyards slightly more attractive than Turkish ones. Although eliminating these free allowances would not completely cancel the incentive for sending ships outside of Europe, it would significantly reduce it.

More importantly still, abolishing free allocation would make EAFs, as well as other types of steel recycling, more competitive. This would incite producers to begin the necessary switch away from blast furnaces and would make European scrap steel more desirable, creating more value for EU-based scrapyards.

As explained in a previous Sandbag briefing, the free allocation of allowances creates obstacles to decarbonisation, to innovation and to the smooth functioning of the carbon market. We therefore recommended that this option be used very carefully, as a last resort instead of the default policy.

[1] Gross tonnage is a non-linear measure of a ship’s overall internal volume.

[5] As per the Council’s proposed Article 10a(2(3e)) of Directive 2003/87/EC: “For the period from 2026 to 2030, the annual reduction rate of the product benchmark hot metal shall not be affected by the change of benchmark definitions and system boundaries applicable pursuant to the fifth subparagraph of article 10a(1)”

Photo by mandy zhu on Unsplash