ETS reform: under the hype, a sense of déjà-vu

EU ETS reform: under the hype, a sense of déjà-vu

On 14 July a long-expected reform proposal of Europe’s carbon market was published by the European Commission. Far from addressing the market’s main issues, it barely adds a few patches and increases the risk of exceeding the cap.

The proposal’s ambition figures for the main ETS are slightly inconsistent: the linear reduction factor of 4,2% if applies from 2021 makes a 62% reduction, according to EC’s own impact assessment [1], instead of the stated -61%, compared to 2005 levels. 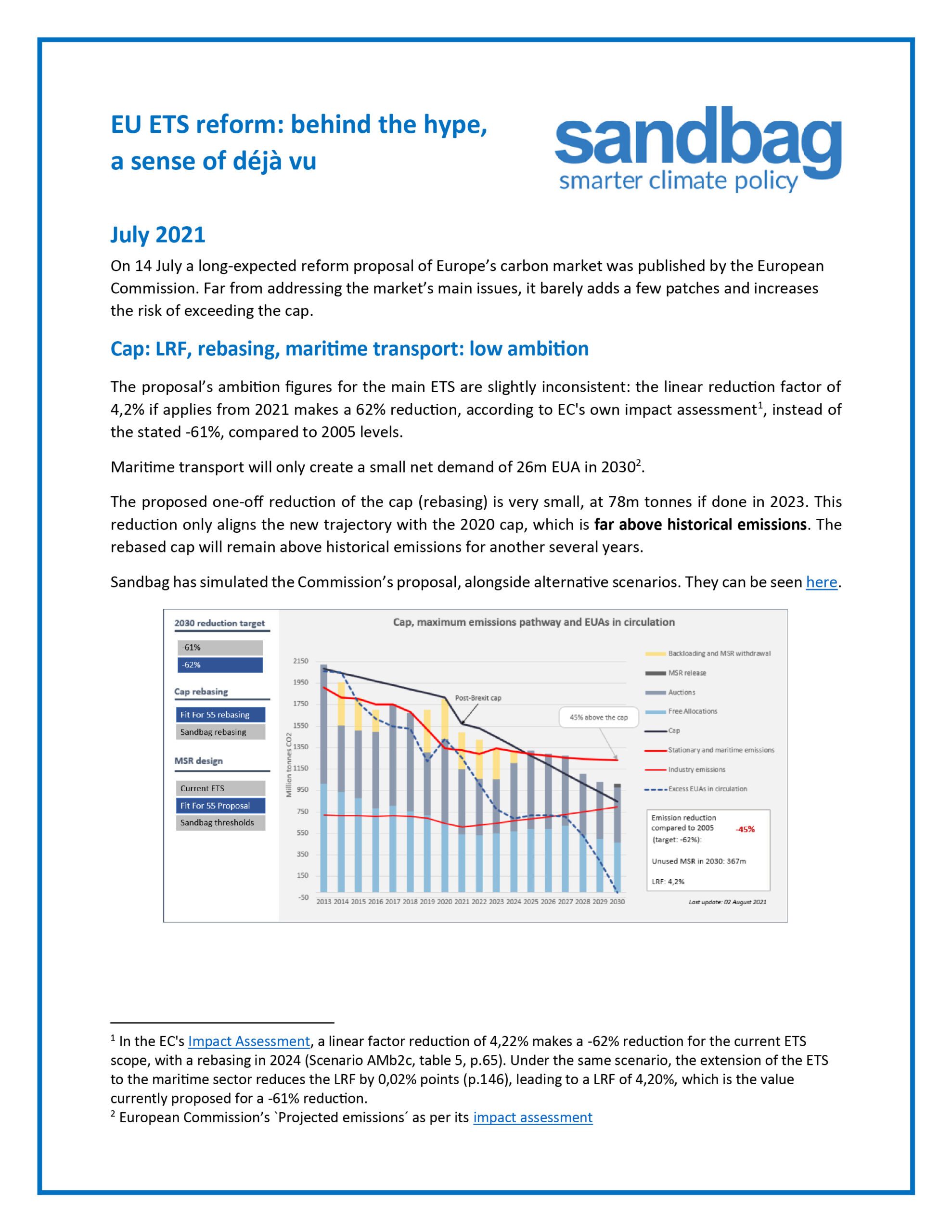 Maritime transport will only create a small net demand of 26m EUA in 2030 under business-as-usual assumptions [2].

Sandbag has simulated the Commission’s proposal, alongside alternative scenarios. They can be seen here.

The proposed reform of the MSR is also a disappointment.

Emission allowances are withdrawn into the reserve when their total number in circulation (TNAC) is over a threshold of 833m. It is a very high number, however the current TNAC calculation does not take into account the cumulative demand from airlines, which keeps the effective TNAC number closer to 700m tonnes currently, and should drive it closer to 500m by the end of the decade.

The proposed Directive reinstates the demand from airlines into the TNAC calculation, effectively pushing the upper threshold back up to 833m allowances.

We have recommended reducing the MSR thresholds (currently 400m and 833m) down to zero and 100 million for low and high thresholds respectively. These thresholds were set to accommodate hedging by power utilities, but this argument is not valid as hedging only involves the futures market and does not require actual permits to exist at the time of transaction.

The directive proposal limits the size of MSR to 400m allowances, which could be released to the market once the lower threshold is attained; however, this limit is ineffective, as in any realistic scenario, the surplus EUAs will not shrink to trigger this threshold enough to absorb 400m allowances.

Release from reserves: emissions out of control

Despite calling itself a cap-and-trade system, the EU ETS has no mechanism to keep emissions below its “cap”.

The MSR’s 833m upper threshold is basically a surplus inherited from past ETS phases which remains available to exceed the cap. In addition, there are several ‘reserves’ which can release allowances into the market: the New Entrants Reserve (320m EUAs inherited from past phases), the Market Stability Reserve (400m), the allowances not allocated for free in earlier years which are kept available in the later years (210m in 2022 according to our modeling), and the reserve of 25 million allowances carried over from Phase III made available to Greece. In total, this system allows to use 1.8 billion allowances (2 years of EU ETS emissions) in excess of the cap, potentially leaving emissions out of control. We demand that, in any year, these reserves should not release more allowances than they absorb if the previous year’s emissions exceeded the cap.

Free allocation of emission permits is not only unfair on taxpayers. The benchmark system on which it relies also distorts competition, by granting more permits to more polluting technologies.

The Directive proposal claims to address this issue by changing the free allocation regime to take into account products rather than processes, which seems well-intentioned. However, the change is not scheduled until 2026, which is out of sync with the urgency of making cleaner technologies competitive.

For example, currently the facilities producing “grey” hydrogen by steam methane reforming or partial oxydation receive 6.84 EUA per tonne of hydrogen produced, whereas hydrogen production facilities using water electrolysis are not eligible for any allowances, which makes them uncompetitive.

With the new proposal, any hydrogen production technology will be eligible, but not until 2026. Even after that date, most electrolysers will not be eligible to free allocation because a minimum of 25 tonnes of daily production is imposed for participation in the EU ETS, ruling out any electrolysers under 100MW. The current state-of-the-art is only around 20MW.

We have been calling for a revision of the benchmarks for a long time already, and welcome the Commission’s proposal to review them, as the current benchmarks mute the carbon price signal by rewarding more polluting processes. For example, white cement clinker plants receive 0.948 EUA per tonne of product whereas grey cement clinker receive only 0.666 EUA. The proposed reform should ensure equal treatment for both clinker types, but not until 2026.

However, ensuring equal free allocation to the production of specific goods is not sufficient. This method will still fail to reduce competitive distorsions between eligible and non-eligible products fulfilling the same function, e.g. wood compared to concrete, or clinker-free cements compared to portland cements in the construction sector. Without free allocation, less polluting materials would become more competitive, creating more substitutions, circularity and innovation.

Despite introducing a carbon border adjustment mechanism (CBAM) to protect some sectors, the Commission is failing to seize the opportunity to create the right price signals to transition away from polluting materials, by keeping free allocation mainly untouched. We are all the more disappointed that the proposal extends the free allocation regime even beyond the end of the ETS, until at least 2035.

Revenue use: the dregs, after free allocation and other compensations

The proposal forces to channel all auction revenues to climate-related purposes [3]. However, there will not be much left after free allowances have been dispensed, as well as compensation for indirect emissions to industry. Much of the leftover allowances are proposed to be sent to the innovation fund, whose effectiveness is uncertain.

This is another missed opportunity for improving the social acceptability of the Fit-for-55 package, which will cost more to European taxpayers and consumers. We therefore urge the EU to redirect more of those revenues to the benefit of its citizens.

The Innovation Fund is given a boost in the Directive proposal [4]: 50m more EUAs taken from auctioned and allocated amounts; 150m EUAs from the new ETS covering buildings and road transport; free allocation no longer provided to the CBAM sectors; allowances which are not issued to aircraft operators due to their closure; revenues generated from penalties raised in FuelEU Maritime Regulation. Unspent funds from the NER300 programme, estimated at €735m, will also be channelled into the Innovation Fund. At €55 a tonne, its endowment may reach over €50bn until 2030.

This suggests the Commission’s belief that decarbonisation is not happening by lack of innovation. However, there are many technologies (or, simply put, “measures”) with a vast abatement potential that are ready, not particularly innovative but simply not economical, which lack support to be deployed. It is the case of green hydrogen production (no longer an innovation) but also high-grade steel recycling, the use of wood instead of concrete in the building sector etc. Those measures, which would require public funding (not least in education, e.g. to train builders to new materials), are not eligible for funding from the Innovation fund by lack of innovation content [5]. In contrast, the IF does not even select projects on their need for funding, giving money to already profitable projects.

In the same way as feed-in tariffs to (un-innovative) renewable energies helped decarbonising the power sector in the last decade, support to the deployment of uneconomical, high-potential abatement measures should help decarbonising our economy. At the same time, the EU subsidised ineffective “innovative” projects through the failed NER300 programme.

We deplore that the IF puts innovation before environmental objectives. For example, projects are selected by comparing their GHG emissions with reference scenarios dating back from 2008, which for hydrogen production represent 8.85 tCO2 per tonne of hydrogen produced, even though efficient “grey hydrogen” plants in Europe only emit 4.09 tCO2 [6]. We therefore urge to refocus the Innovation Fund on environmental impact rather than innovation.

Modernisation Fund: more but not much better

We welcome the exclusion of the financing of any fossil fuels through the Modernisation Fund, strengthening the consistency with the EU’s climate objectives enshrined in the European Green Deal and EU Climate Law.

The ETS Directive proposal increases the size of the Modernisation Fund by the proceeds of auctioning an additional 2.5% of the cap [7], to fund the ‘green’ transition of poorer Member States. A major change is the addition of Greece and Portugal as beneficiaries, as the threshold for inclusion is increased to 65% of the EU average GDP per capita in 2016-2018 [8], up from 60% (of the 2013 EU average) currently.

According to Sandbag’s estimates and data provided by the revised ETS Directive, this new financing (i.e., 2.5%) will amount to around 344 million allowances over the 2021-2030 period, under the proposed cap. Assuming a carbon price of €55, this represents around €19 billion extra funding.

The existing beneficiary countries of the Modernisation Fund [9] are already facing barriers while closing their coal installations and replacing them with new capacity. Among the most worrying challenges impeding the swift transition of the region, we reiterate the need for ensuring political commitment to strategic investment planning, solving administrative inefficiencies and improving institutional quality and know-how. These traditional shortfalls prevent these countries from exploiting their full potential in their transition to low-carbon economies. Thus, we stress the need for ensuring transparency in the selection and assessment of projects, based on objective criteria, and the active consultation of all stakeholders [10].

As such, we are concerned that the problem with energy transition in CEE countries is not the lack of funding, but the lack of capacity to deal with the funds already granted. To foster a strategic and efficient absorption of the available financing from the Modernisation Fund, the Commission should provide more technical assistance to the potential beneficiaries as for developing high-quality projects, notably to municipalities and other local and regional authorities, which lack the necessary administrative and practical competences.

Moreover, it is also timely that the Commission proposes to increase the allocation of the resources from the Modernisation Fund from 70% to at least 80% to a series of priority investments, with several additions to the list [11]. In this regard, Sandbag especially salutes the first new priority area (heating and cooling from renewable sources), which we urged to develop in our report.

However, we believe this share should be raised to 100%, to ensure that the list of priority investments is fully adhered to by the eligible Member States and to channel all the available funding to the most pressing climate needs. This would strengthen the accountability and transparency of using the funds, as spending would be fully reported and monitored. Special attention must be devoted to the re-skilling, upskilling and educating of the workforce (already a priority area of the Modernisation Fund), as investing in human capital will remain a central issue for the region.

[2] European Commission’s `Projected emissions´ as per its impact assessment

[3] with the exception of the revenues used for the compensation of indirect carbon costs for industrial; this includes “reducing distortive taxes” for lower- and middle-income households

[10] This is important not only for the successful replacement of the fossil-fuel power plants, which is conditioned by an improved governance system in these countries, but also for respecting democratic and accountable principles, which help deliver high-quality projects.

[11] Heating and cooling from renewable sources; Improving energy efficiency on the demand side, including in transport, buildings, agriculture and waste; Supporting households to address energy poverty concerns.