Looking for a perfect fit

Why we need an ambitious starting point under the ESR

Even before the European Commission’s proposal for the next phase of continued Effort Sharing, Sandbag had highlighted the importance of an ambitious starting point. This will ensure the EU’s largest climate policy instrument drives sufficient reductions in the non-traded sectors (see our report “The Effort Sharing Dinosaur”). The reason for that is simple: similarly to its older sibling – the EU ETS – the Effort Sharing decision also provided an overall emissions budget that is too fat to keep pace with actual emission reductions. This has led to the build-up of a huge surplus (over 1 billion to date, and expected to increase to over 1.7 billion by 2020). ‘Hot air’ seems to be the defining characteristic of EU climate policy tools so far – now is the chance to change that.
We cannot afford to repeat the same mistake if we want the system to take our non-ETS sectors beyond Business as Usual. If Business as Usual was the solution, why have a policy in the first place?
To put these sectors on a credible path towards our long-term targets, we need a budget that fits and that is tight enough to stimulate additional reductions. As Sandbag has highlighted in the past (see e.g. our report “Bend it, don’t break it” and our presentation “The missing link in the Effort Sharing”), a tighter budget is achievable in a cost-efficient way by making better use of the possibilities for cooperation between member states and the development of Project Based Mechanism as Article 5 of the Effort Sharing Regulation makes provision for.
Furthermore, an ambitious starting point is essential if we want to have any chance of achieving our agreed 2030 target under the Paris Agreement. Under the original Commission proposal – which is largely included in the Council position – emissions would only have to decrease by -28% compared to 2005 as opposed to the formal -30% target as agreed. Taking into account external flexibilities (with the EU ETS and the LULUCF), the actual target is diluted even further to -25.5% by 2030.

Taking into account external flexibilities and the possibility to carry over surpluses, the actual reduction target under the Council position is only 25.5% 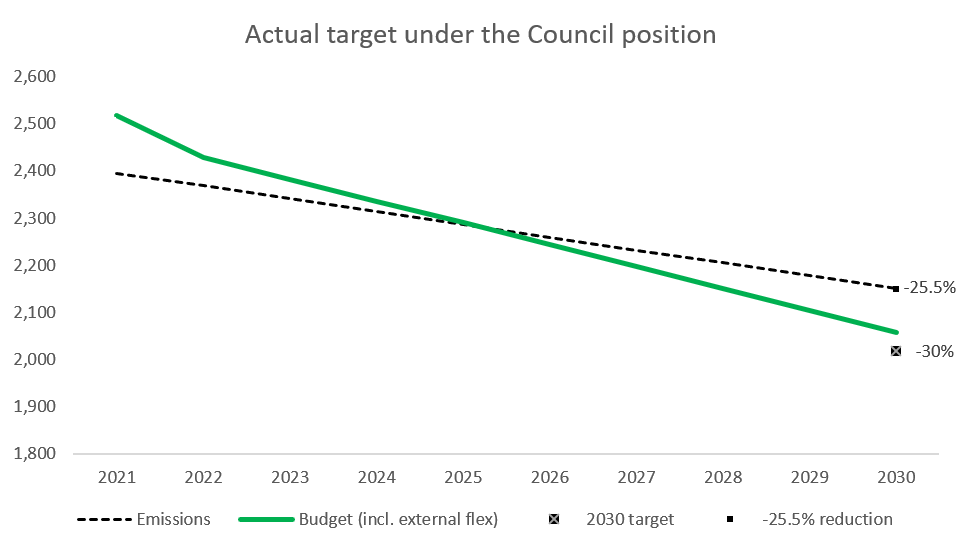 The graph above assumes a total 2021-2030 emission budget based on the Council position, including the Annex IV allocations and the external flexibilities with the ESR and LULUCF (380 Mt spread equally over 10 years). The starting point is based on average 2016-2018 emissions, using the member states’ most recent WEM projections. It is assumed that Member States would follow a linear trajectory between 2020 (based on the latest WEM projections) and a -25.5% reduction in 2030. Because emissions are lower than the budget in the beginning of the period, a surplus is built up which could then fill the reduction gap in the second half of the period.

We have therefore welcomed the position of the European Parliament which significantly tightens the starting point compared to the original Commission position, resulting in 500 Mt additional emission cuts. This starting point ensures a perfect fit that will require member states to reduce their emissions gradually toward the agreed -30% target by 2030. 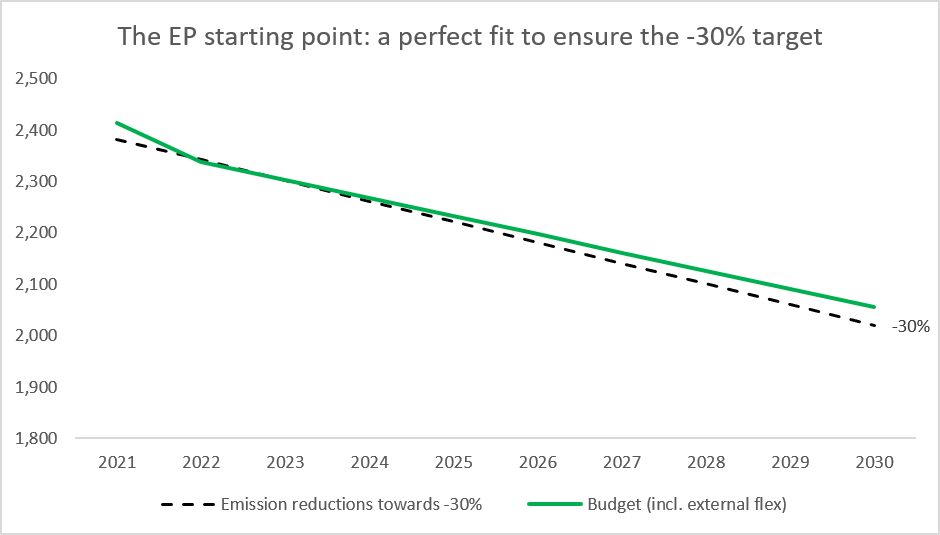 The graph above assumes a total 2021-2030 emission budget based on the Council position, including the Annex IV allocations and the external flexibilities with the ESR and LULUCF (380 Mt spread equally over 10 years). The starting point is calculated in line with the EP position, using the Member States’ most recent WEM projections and the revised AEA budgets for 2020. It is assumed that Member States would follow a linear trajectory between 2020 (based on the latest WEM projections) and a -30% reduction in 2030. There would only be a small build-up of a surplus towards the end of the period, mainly due to the use of external flexibilities. A small surplus is desirable to ensure a certain amount of liquidity for trade and cooperation between member states under article 5 of the ESR. This will be increasingly important in the end of the phase as member states will have exhausted their own cost-efficient potential and will be look across their borders for further potential.

The upcoming trilogue on the 21st of November provides an opportunity for the Council to stop lagging behind, and start following the leading example of the Parliament. EU governments need to stand by the target they’ve agreed to and avoid diluting it further at all costs. The 2030 objective is already at the lowest range of what the EU needs to do (not even on the 80% trajectory to 2050). If the EU is to conserve any of its climate credibility, we must at least ensure that this minimum effort is realized.
On the bright side of things, this solution might encourage Member States to look beyond their borders in meeting their targets and hopefully stimulate investment and intra-European cooperation for cost-effective reduction possibilities in Effort Sharing sectors.
Sandbag’s message to the EU Governments is unambiguous: please give the ESR a better fitting outfit to help it work well in its next phase. Let us be clear: this is not only necessary to achieve our target and maintain our credibility, it is also a prerequisite to ensure that our buildings-, transport- and agricultural sectors are put on cost-efficient pathway towards a low-carbon carbon future.

Blog: Looking for a perfect fit – The #ESR surplus is putting another EU climate policy in danger of underperforming its targets https://t.co/s0S27HQGyp pic.twitter.com/PWJrM1F5fC