EUETS trialogues: The diet has begun, but there's plenty of fat left to burn

14th September, Brussels – Last night’s Trialogue discussion supported progress towards a functional ETS, but if no further progress is made, will still leave a surplus of 1-2 billion tonnes of EUAs on the market in 2025, preventing the carbon price from rising to a level consistent with achieving Paris objectives.

The discussion agreed to two primary measures which will improve the robustness of the ETS.

Focus now moves to the October trialogues. The ETS was designed to give a steady and increasing price signal for investment and carbon abatement, and it is vital that the Trialogues enable it to fulfil this purpose. The discussion on October 12th must stop ignoring the persistent surplus and also tackle other key issues of the reform.

Agreement is needed on:

Why is rebalancing needed?
To avoid the need for further ETS reform, a new rebalancing mechanism must be introduced in conjunction with the carbon market report in the ETS. This mechanism could adjust the supply of allowances, at agreed intervals, in line with the Paris Agreement timeline. This regular rebalancing would give the ETS long-term resilience to different emissions scenarios and economic cycles. It would also address the problem that none of the amendments currently proposed adequately address the impact on allowance demand from overlapping policies (such as energy efficiency, renewables and nuclear expansion and coal phase-out). Following the principle introduced by the Council cancellation clause, such a mechanism could provide the missing link between cancellation of surplus in circulation and real emission levels.

The Trialogues are making progress, but they’re still ignoring the fundamental issues keeping the carbon price low: the continuing surplus and the fundamental disconnect between the ETS’s outdated, pre-Paris Agreement, cap and what would be needed to deliver the scenarios agreed on internationally. Furthermore, it continues to ignore developments in real emission levels, driven by complementary policies, affecting the demand for EUAs.

The reform must end up with a mechanism to permanently realign market supply with demand and establish prices appropriate to the rapid decarbonisation challenge we all face to prevent dangerous climate disruption. Until this happens, the ETS will remain an inflexible policy mechanism, unable to cope with new breakthrough technologies, drastic market fluctuations and exponential uptake rates of already available technologies. 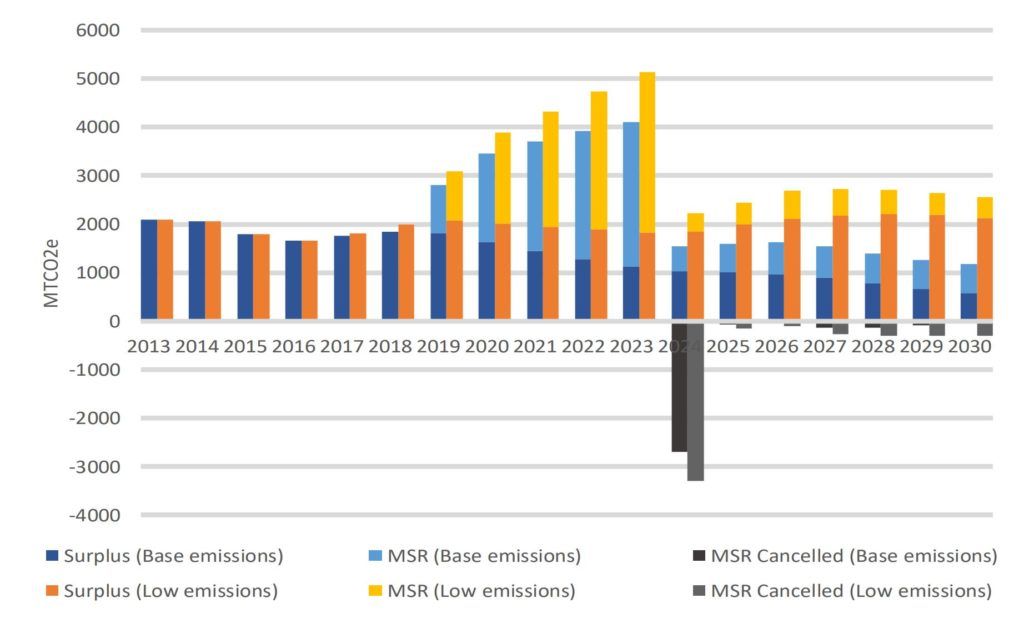 Even with the Council proposal, the ETS remains oversupplied by 1-2Bt in 2025, suggesting little change in the carbon price