The exponential growth in uptake of electric vehicles (EV) represents an exciting step change which could have huge benefits for air quality and the climate. Sandbag is fully supportive of this change; here, we explore how the environmental benefits can be maximised. Bluntly, EVs will begin to deliver substantial benefits only if the proportion of renewable energy in the grid continues to accelerate.

Monday’s UK Contracts for Difference auction results show that offshore wind costs in the UK have halved from 2014 to £57.50/MWh and, according to BEIS (quoted in Carbon Brief), will be cheaper than gas by the early 2020s, even with full system costs included. This development represents not only a tipping point in the transition to a low carbon grid but also underpins efforts to reduce transport emissions at a time when the volume of electric vehicles is rapidly increasing. The government should set out a clear vision for the accelerated growth of renewable energy in the forthcoming Clean Growth Plan, and prioritise another CfD round to take advantage of this almost subsidy-free source of power. 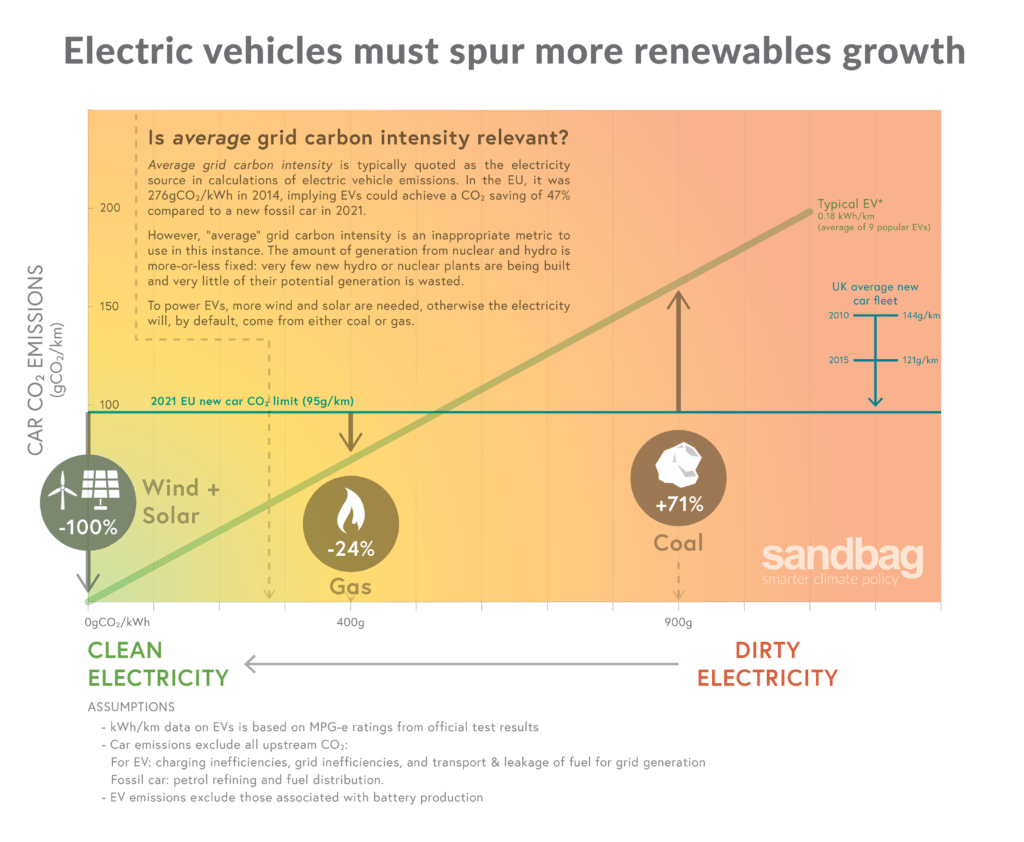 EVs will place additional demand for electricity on the grid which didn’t previously exist. The above graph shows that, where the electricity grid is dominated by coal, an EV might be worse for the climate than a new internal combustion engine (ICE) car. Even with a gas-dominated energy mix, the CO2 emissions of an EV are barely better than a new ICE car. Grid carbon intensity can also vary enormously from hour to hour and on seasonal timescales.

Though pure electric vehicles currently account for a tiny proportion of all new car registrations (~0.6% according to SMMT data), sales have risen by 62.5% compared to August last year and the market share of pEVs is expected to increase as the cost of batteries halves within the the next 10 years. National Grid estimates that up to 9 million EVs may be in use in the UK by 2030, requiring an additional 4-10 GW of peak load.

If this additional power for pEVs comes from gas plant, there could be a near term emissions saving of ~24% compared to ICE cars.However that figure doesn’t account for future improvements in ICE car efficiency and implies a stalling of emissions reductions in transport for the next 20+ years – a scenario that stands at odds with the trajectory of emissions cuts required to meet the UK’s Carbon Budgets.

If the extra demand can be satisfied by renewable power, pEVs will accrue zero emissions during use. To produce enough power, solar, hydro and offshore wind – now cheaper than all fossil power sources – will need to be supported by grid-scale and domestic energy storage facilities as well as demand-side measures in order to smooth the supply-demand balance and to counteract intermittency.

EV registration data from SMMT (until August 2017), energy mix calculated from Ofgem data (up to Q1 2017)

The success of renewables in becoming the cheapest form of electricity generation can – with the right policy environment – create new opportunities for other sectors to decarbonise. Within the last few months, Jaguar Land Rover and Volvo have joined a growing body of car companies announcing plans to electrify their consumer vehicle fleet by 2020. Meanwhile Mercedes and Tesla are prototyping electric HGVs.

Mass electrification will place significant new demands on the electricity sector and the effects will start to be felt in the coming decade. Zero carbon is now also low cost and the UK’s Clean Growth Plan must reflect this new reality by ensuring that renewable energy deployment keeps pace with demand from electric vehicles.

Footnotes
This article does not consider vehicles powered by hydrogen or power-to-liquids fuels which are typically much less efficient than EVs (see Transport & Environment paper on decarbonising transport).