This analysis is based on estimations using data available as of 1 April 2021. It will be updated as more data is made available during the coming weeks.

The European Commission has released the bulk of its data on reported emissions from EU ETS sectors for the year 2020. Emissions in 2020 were 1,377 MT, a decrease of –13.9% compared to 2019, and 26% below the ETS cap, according to estimates from Sandbag.

The significant drop in emissions compared to 2019 will come as no surprise, and is only 5 MT lower than Sandbag had forecasted before the release. With the massive drops in production and changes in consumption patterns caused by the Covid-19 pandemic, a major decrease in emission levels was clearly to be expected. Despite the many uncertainties, Sandbag’s earlier forecast of –13.6% was not far off the real emission reduction.

It is important to note that emissions data is not yet available for around 8% of installations. Reported emissions were 1,333 MT and we estimate unreported emissions to be 44 MT, as described in the attached methodology note. This total of 1,377 MT is 26% below the ETS cap for 2020. This contributed to an increased EUA surplus of 1,392 MT going into the start of Phase IV (the surplus is the number of allowances available in excess of demand for covering emissions, even after the removal of allowances by the Market Stability Reserve). This surplus is an increase on 2019’s surplus of 1,219 MT, showing once more that the MSR does not even withdraw enough EUAs to stop the surplus from growing, let alone reduce it. (In 2020, the MSR withdrew 367 MT.)

This huge surplus is bad news for climate action and must be tackled in the upcoming EU ETS revision as a matter of urgency. The large surplus means that, as the ETS cap is tightened in line with the EU’s new 2030 climate target, emissions will be able to exceed the cap in future years, by up to 66%. In this way, the surplus undermines the EU’s climate ambition. It should be neutralised by:

Behind the overall drop in emissions, different sectors have their own profile. Aviation emissions fell by a whopping 64 % to 24.7MT, as borders were shut and flights grounded throughout Europe. The drop is surprisingly higher than that observed in intra-EU air traffic (down “only” 54%), as reported by Eurocontrol.

Our forecast for stationary installations seems to have been extremely accurate. The above breakdown between Power & Heat and Industry slightly overstates emissions from industry in the new estimate, as explained in the appendix note, so the real figures might be even closer to our pre-release forecast, obtained through a matrix algorithm. In our forecast, we expected industry’s carbon intensity to reduce by a modest 0.6%. The preliminary figures from the European Commission show no encouraging signs of a faster decline. Emissions from stationary installations fell by 11.7% to 1,352 MT, with the power sector leading the reductions.

While the EU’s emissions are continuing to fall based on real decarbonisation efforts, mostly in the power sector, the emissions data reveal trouble on the road ahead. If the large surplus remains untackled in the upcoming revision, the effectiveness of the EU ETS for achieving the EU’s climate targets in the other sectors will be significantly compromised. 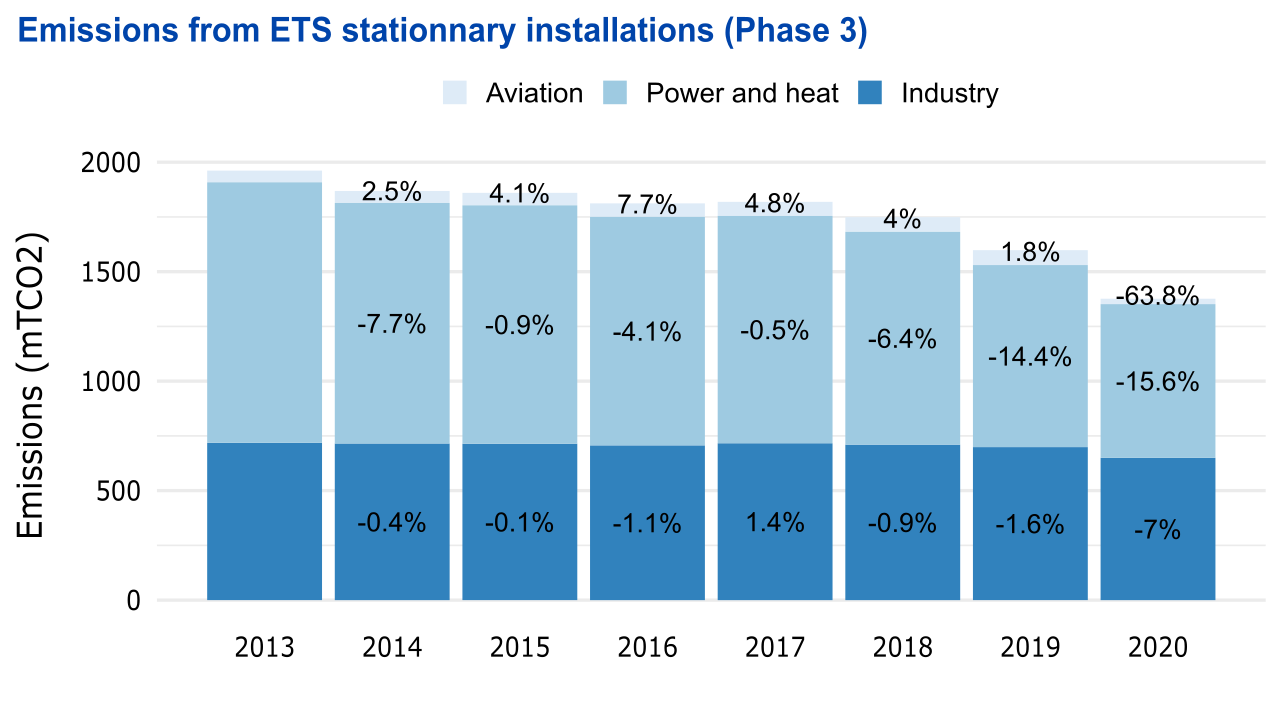 [2] For details on the data and methodology used for these estimates, please look at our methodology note.

[3] For more details on Sandbag’s key asks for the reform of the EU ETS, please see our response to the European Commission’s public consultation.