How to fix the ETS 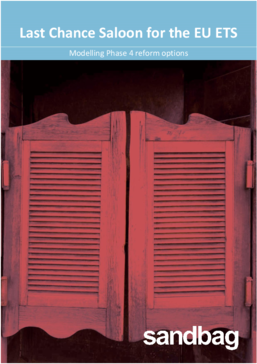 Each year, industries across the EU receive billions of Euros worth of free allowances from the European Commission in order to protect them from the costs of compliance with the EU carbon market. The logic goes that, were they not to receive this free allocation, they would be internationally uncompetitive.

Sandbag has developed a new model which looks at the impact of different reform options on free allowance allocation to European industries and helps policymakers to understand exactly what they are voting for.

Our modelling shows that the Commission’s current binary proposal is very likely to trigger the cross-sectoral correction factor (CSCF). However, if free allocation is targeted towards installations most highly exposed to carbon leakage risk, the CSCF can easily be avoided – even with growth in industrial activity, and even with a smaller overall cap.

ETS Phase IV reform is currently under debate in the European Parliament. Throughout Phase III, the best performing installations have not been receiving their full applications for allowances because too many sectors have qualified for carbon leakage protection under the existing binary approach. This has triggered a uniform ‘cross sectoral correction factor’ (CSCF) to keep the total free allocations under their share of the cap in Phase III.  Free allocations have also failed to keep in-line with changes in activity levels, leading to over-allocation in many areas and huge windfall profits for some industries (see Sandbag’s report on the cement sector).

Some industrial sectors are calling for a higher proportion of the overall cap to be set aside for free allocations in Phase IV. Yet, more free allocation is not needed if compensation to industrial sectors is more appropriately aligned with the extent of their carbon leakage exposure. Rather, we recommend that the auction share should be increased to keep pace with comparative efforts to reduce emissions through carbon markets or taxes being implemented in other regions, for example the new Chinese carbon market or the Canadian carbon price of €7 in 2018 (rising to €34 by 2022).

A more targeted approach to carbon leakage protection would enable best performers to receive their full benchmarked free allocation whilst maintaining the current auction share. Without effective reform, the ETS will be stuck in the wilderness out to 2030.

Based on our detailed modelling, Sandbag recommends the following reform proposals to fix the ETS:

“Ironically, the demands for full free allocation from many different stakeholders will mean that the whole system gets an automatic haircut, including those who are doing the most to cut their emissions. A targeted system more fairly distributes the free allocation to protect those considered most at risk.

Most importantly, targeting free allocations leaves room to bring down the surplus that has paralysed the system.

This is the last chance saloon for the ETS. If we don’t get reform right this time, we will be stuck with an impotent climate policy out until 2030.”