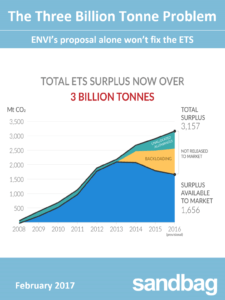 1 February 2017
Sandbag’s new analysis of European emissions in 2016 reveals that the EU ETS has hit a new record of 3 billion tonnes of surplus EUAs, including both volumes available to the market and those destined for the MSR.
This record surplus and accompanying low carbon prices mean that the EU ETS has failed as a policy, for those that expected the system to:

The Environment, Food, Health and Safety Committee (ENVI) December report fails to address the surplus problem. To deliver meaningful reform, the European Parliament and the Member States need to support the policy option of re-basing the EU ETS cap in line with emissions in 2020, or find other options that remove an equivalent amount of surplus from the market.
Read the full report: The Three Billion Tonne Problem