But the low carbon price is threatening further decarbonisation

Sandbag has analysed the data, and we explain in 8 graphs below what you need to know.
Our comments are:

Coal power plant emissions fell by an impressive 11% in 2016.  But emissions from Europe’s 280 coal power plants still accounted for 39% of total EU ETS emissions.  It is clear that phasing out coal in favour of renewables is the quickest and cheapest way to rapidly reduce ETS emissions, and policymakers must figure out how to make this happen.  A near-zero carbon price is doing nothing to help this.  The low carbon price is also stalling industrial decarbonisation, where emissions have fallen by less than 1% in the last four years.

Power sector emissions fell by 4% in 2016, as coal generation plummeted by 11%.  Emissions at gas power plants rose, to replace dirtier coal. This was caused by coal power plants closing, and temporary coal-gas switching as the gas price became cheaper than coal.  The ETS carbon price did almost nothing: a €5/tonne carbon barely changed the relative coal-gas economics.   Since 2010, because of huge investment into renewable generation, overall power sector emissions have fallen by 19%, with coal emissions having fallen 16% and other power emissions having fallen by 24%.  More details on the power sector changes are our report from January: “Europe’s Power Sector Transition in 2016”.
Industrial emissions, by comparison, have barely fallen for 4 years now.  They fell by 0.2% in 2016, and they are only 1% lower in 2016 than they were in 2012.

European coal power plants emissions fell by 11% in 2016.  Almost half the fall was from the UK, with a massive 58% year-on-year fall in coal emissions.  Big falls were also recorded in Spain (-27%), Greece (-21%) and Italy (-17%).
The biggest two coal polluters saw the smallest reductions: German coal power plant emissions fell only 4%, and Poland emission fell by only 1%.  Even since 2010, the movements have been small: -5% for Germany and -7% for Poland.
The change in emissions for each of Europe’s 280 coal plants can be seen on this interactive map.

The UK saw its coal power plant emissions collapse by 58% in 2016, and down 71% since 2010.  Nearly every UK coal power plant has seen its generation collapse, thanks to the UK’s carbon price floor – an £18/tonne top up to the EU ETS price.  The only two coal plants that haven’t seen a significant fall are Aberthaw (despite the European Court of Justice decision over illegal levels of NOx emissions), and Northern Ireland’s Kilroot (which is not covered by Great Britain’s coal phase-out agreement).

As always, all top ten of the 13,000 polluters are either lignite or hard coal power plants.  Despite that, all of these top ten polluters have seen smaller-than-average emissions reductions, compared to the 11% fall for total European coal power plants.

That is because lignite power plants, especially in Germany, continue to run nearly 24 hours a day x 7 days a week.
The new owners of Vattenfall’s lignite plants – EPH’s LEAG – continue with their lack of transparency, by not yet publishing their 2016 emissions.  Their omission accounts for over half the missing data in today’s data release. 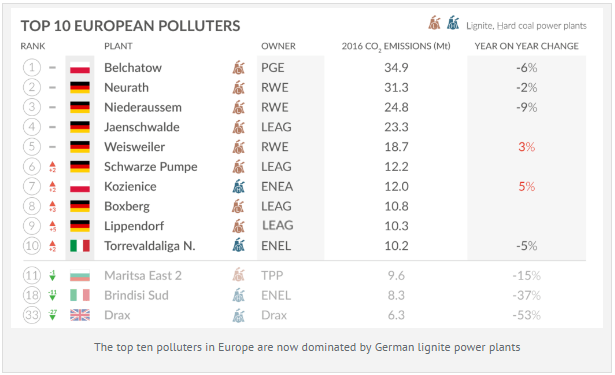 For the first time in 2016, the surplus – the cumulative cap minus cumulative emissions – has exceeded 3 billion tonnes.  Half of this surplus is available to the market, but the “invisible” Market Stability Reserve (MSR) surplus is rapidly growing, and now stands at 1500Mt. 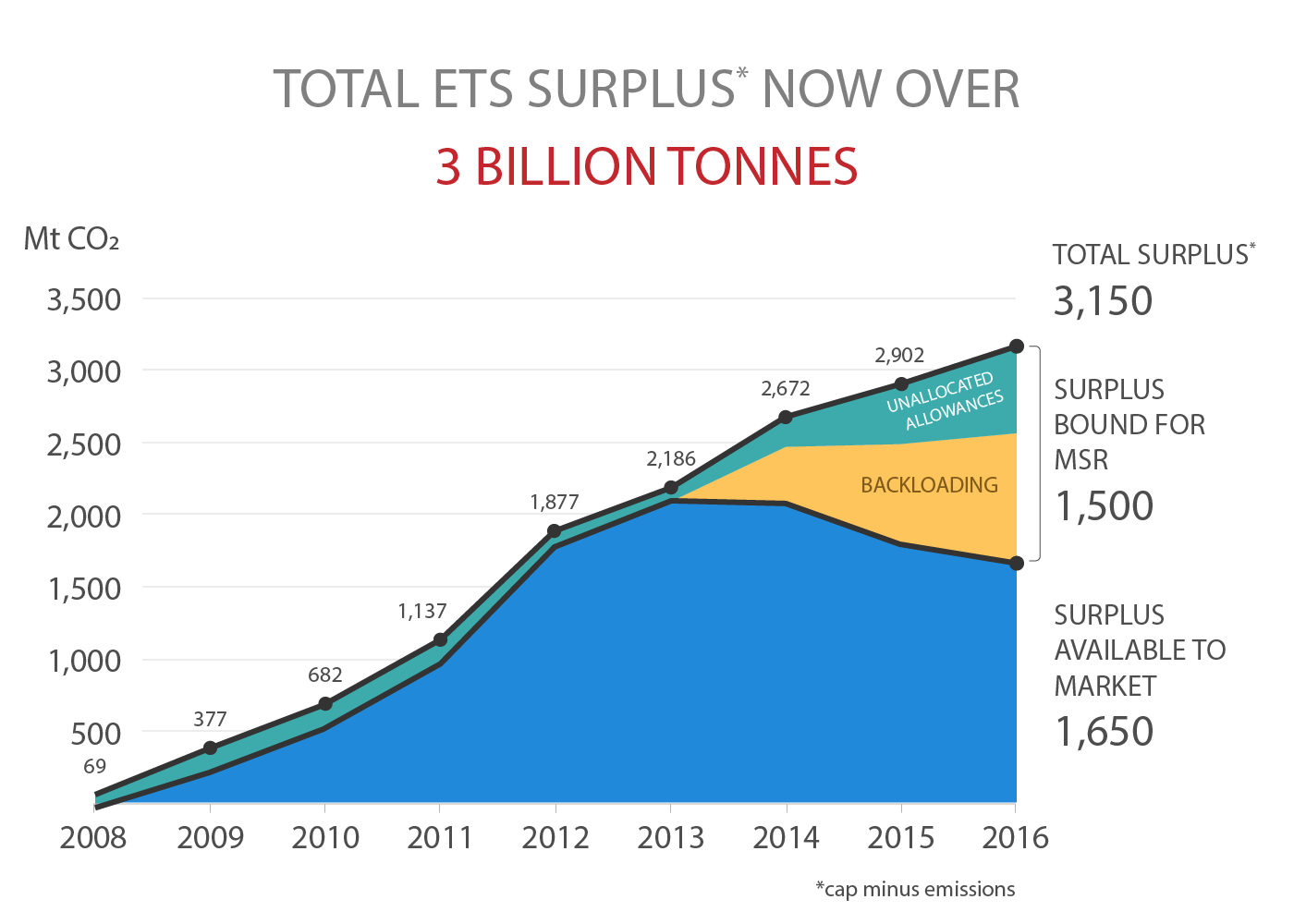 This means emissions are now 11% below the cap, and this gap means the the cumulative surplus will continue to increase year on year.  Although the Council’s proposals to reform the ETS will help (especially on doubling MSR rate, and on MSR cancellation), the underlying problem of the huge disconnect between the cap and emissions will remain in the future.  This is why Sandbag will still campaign to get the cap reduced, to be realigned with actual emissions. 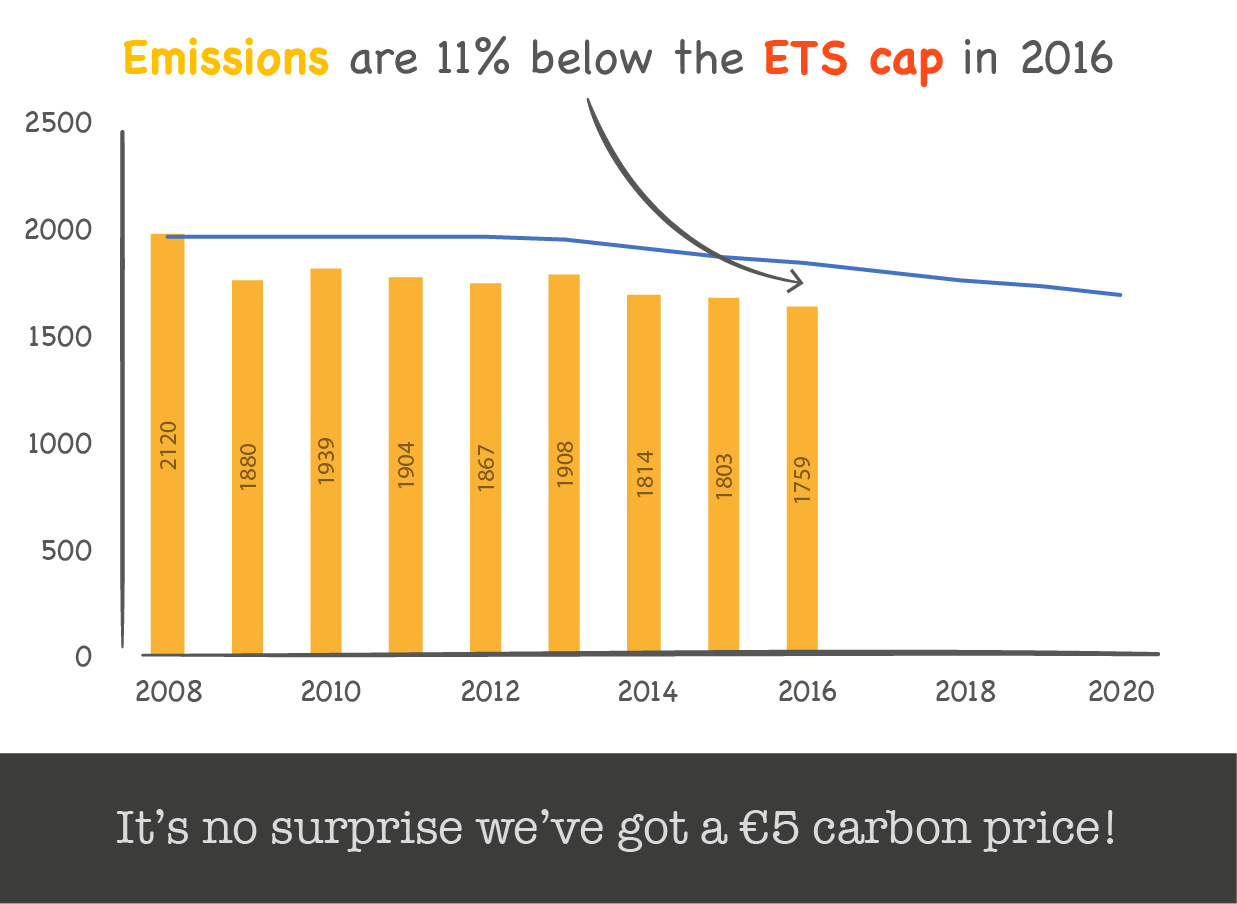 Emissions in 2016 were 11% below the ETS cap, so it’s no surprise that the carbon price is so low