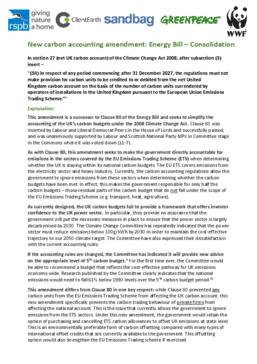 This briefing presents an amendment to the 2015-16 UK Energy Bill drafted in partnership with Client Earth, and supported by WWF, RSPB and Greenpeace.
It seeks to make the UK government directly accountable for emissions in the sectors covered by the EU Emissions Trading Scheme (ETS) when determining whether the UK is staying within its national carbon budgets. The EU ETS covers emissions from the electricity sector and heavy industry. Currently, the carbon accounting regulations allow the government to ignore emissions from these sectors when determining whether the carbon budgets have been met. In effect, this makes the government responsible for only half the carbon budgets – those residual parts of the carbon budget that do not fall under the scope of the EU Emissions Trading Scheme (e.g. transport, heat, agriculture).
This amendment was presented to the 2015-16 Energy Bill at report stage as New Clause 10, where it was supported by the Labour, the SNP, the Lib Dems and the Greens. We write up the vote in more detail at this blog.
It has now been retabled by Labour as the Bill has returned to the House of Lords, where we eagerly await a decision.
Skills Posted on