… are declining, but not fast enough to meet the more ambitious end of our long-term targets of 80 to 95% emissions reductions compared to 1990.

…are accelerating in the power and heat sector, but industry emissions have been stable in recent years. Aviation emissions are small but growing rapidly. Net demand for EUAs from aviation will continue to increase. 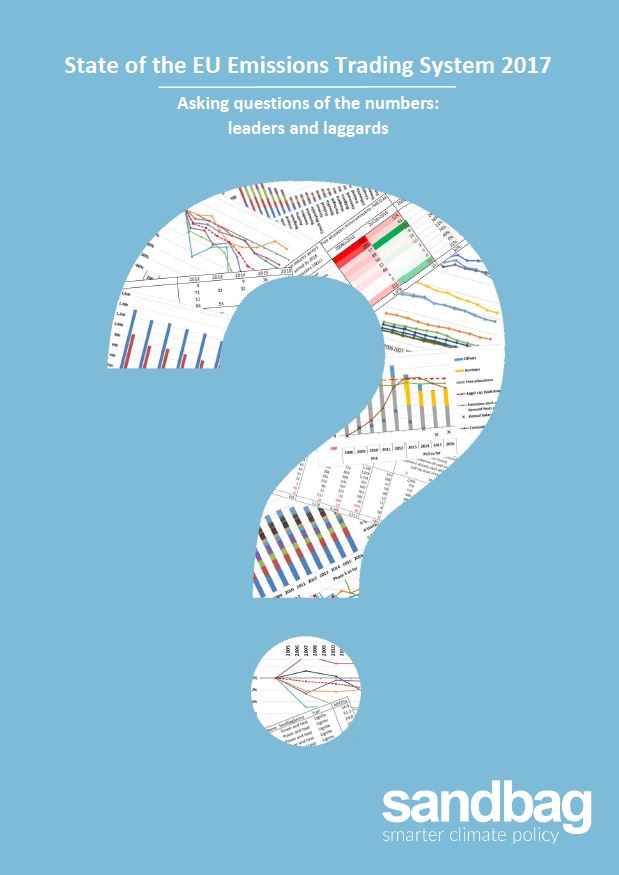 … and unfortunately the most highly emitting member states, Germany and Poland, are reducing emissions most slowly and increasing their share of total emissions. Reliance on coal-fired power generation is the main culprit. The new government in the Netherlands has promised to tackle increasing emissions, with policies including a coal phase-out by 2030.

15 of the top 20 emitters are coal and lignite plants; 10 of these are in Germany and Poland.

The increase in renewables has lowered power sector emissions. They have mainly replaced less polluting fossil fuels such as gas, with coal only decreasing slightly since 2013. There’s still a lot of reduction potential in coal. So far, Article 10c allowances have mostly been allocated to coal and lignite installations.

… emissions declined during Phase 2 (2008-12) with the economic crash, but have been fairly stable in the current phase. Reductions have been mainly achieved by lower production, not by reduced emissions intensity, although there are some exceptions (e.g. paper and paperboard and N2O reductions in chemicals). On the current trajectory, our carbon budget will run out long before heavy industry reaches carbon neutrality.

Free allocation is tightening in Phase 3 compared to Phase 2 for most industry sectors, but from 2008-2016, industry’s total potential to monetise oversupply has likely reached a cumulative level of more than €9 billion. The cement and lime sector is the biggest winner.

The ongoing approach for protecting industry sectors from carbon leakage continues to dilute the effectiveness of the ETS as a tool to identify the lowest cost emissions reductions.

The top twenty emitters in the ETS in 2016

… has decreased in recent years (because of the short-term backloading intervention) but at the end of 2016 there is still a huge 1.5 billion surplus. Phase 4 reform measures are insufficient to match supply to demand in the short to medium term. Sandbag expects the surplus to continue, and as discussed previously, this means a significant increase in the carbon price is unlikely.

The full report takes a detailed look at the EU carbon market to date.

A separate report examining the future of the ETS will be published shortly.

The report uses data downloaded from the Union Registry EU Transaction Log (EUTL) in August on emissions, free allocations, offset use (2008-2012), and offset entitlement; data from the Commission website on offset use post-2012; data from the appointed auctioning platforms on auctioned allowances; data from Eurostat on GDP per capita data and total sold production; and data from Eurostat on power generation.
Data from the European Environment Agency is used to adjust for scope change between Phase 2 and Phase 3.
Installations are mapped to main sectors based on NACE code (plus other free allocation criteria for power and heat).