Today, the European Commission published the preliminary 2018 emissions under the EU’s Emissions Trading Scheme (ETS). Sandbag has analysed the data, and below we explain the key stories.

Lignite emissions fell only 3% in 2018, are now higher than hard coal emissions, and constitute 18% of all EU-ETS emissions.

9 out of 10 of Europe’s biggest CO2 polluters are lignite power plants, and 7 of these are in Germany.

Half of the lignite problem lies in Germany, who are dragging their feet on lignite closures under their 2038 coal phase-out plan. And the other half of the problem is in Poland, the Czech Republic, Bulgaria, Greece and Romania, who have not yet made plans to phase out lignite.“

2018 emissions fell by 3.5% to 1754MTCO2 (or 3.9% to 1686MT excluding aviation). This is a slightly larger fall than we predicted in our January forecast of 1700MT. Last year we found emissions rose slightly (by 0.3%), so the fall isn’t as impressive as it seems, but still bucks the trend of global increases in emissions. 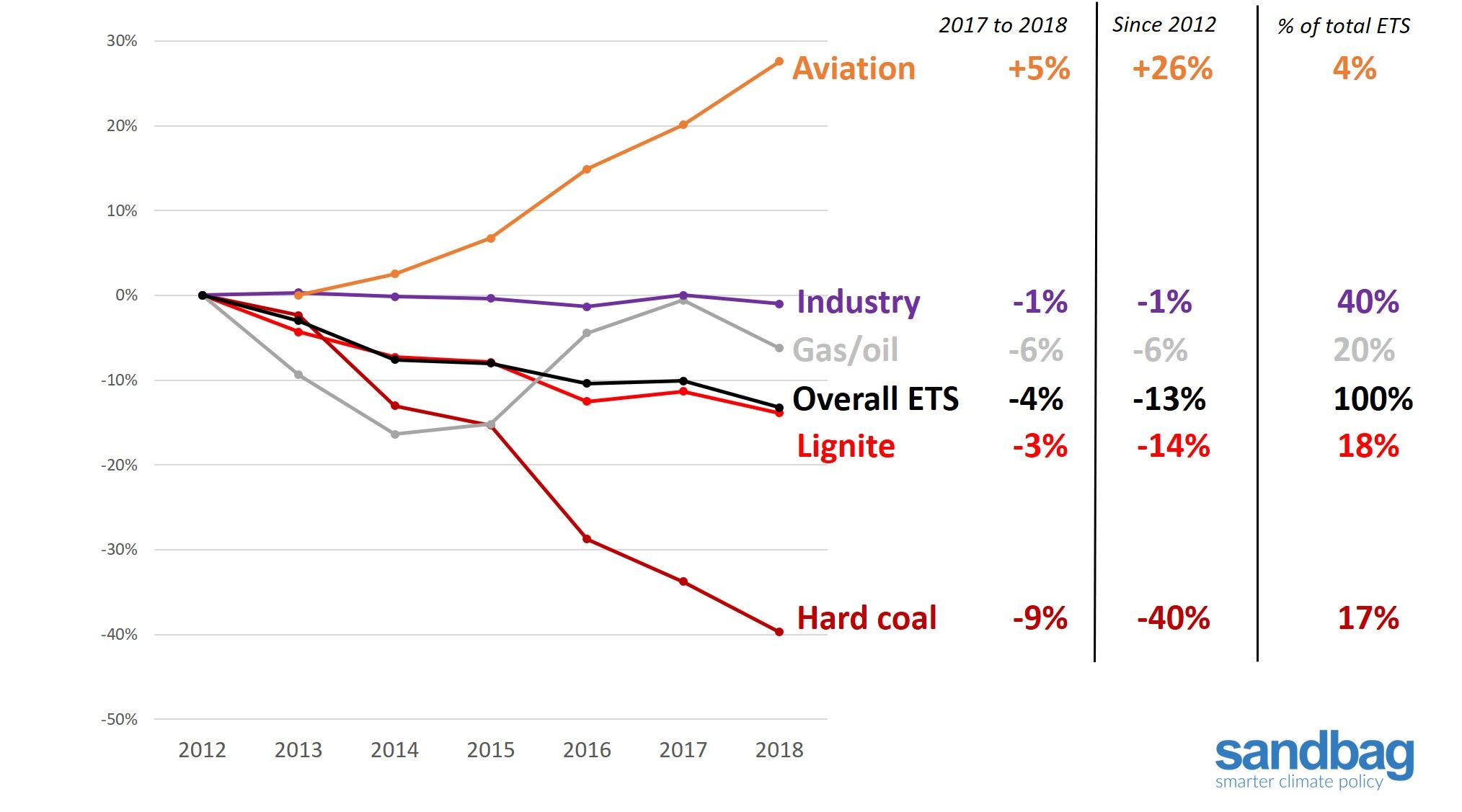 Nine out of ten of the top ten CO2 emitters are lignite power plants. Seven of these are in Germany – the biggest of which, Neurath, even saw its emissions rise by 8%.

The only change since 2017 was the introduction of Ryanair into the top 10, as its emissions rose 7% to 9.9 million tonnes of CO2 emissions in 2018. This is the first ever entry into the top 10 that is a not a coal power plant.

The divide between lignite (brown coal) and hard coal is starker than ever.

Hard coal power emissions fell by 9% in 2018 and are now 40% below 2012 emissions. Almost all countries except Poland are now developing plans to phase-out hard coal, and have plans to replace substantial amounts of this with wind and solar electricity. Over half the fall in hard coal emissions came from the UK alone. Impressively, because hard coal has been replaced with predominantly wind and solar, there has been no rise in emissions from gas generation.

Lignite power emissions fell by only 3% in 2018, and are down only 14% since 2012. Germany accounts for around half the emissions. Almost all of the rest of the lignite emissions are from five countries: Poland, the Czech Republic, Greece, Bulgaria and Romania. None have plans to phase out lignite as yet.

Industrial emissions: the same as 2012?

Industrial emissions are almost unchanged since 2012. They fell 1% in 2018, bringing them 1% below 2012 levels. There were small falls in iron and steel emissions as steel output fell slightly in the EU in 2018. Overall, industrial growth was very weak, despite overall stronger economic growth, which enabled this small fall to take place.

In total, 90% of industrial emissions were still covered by free allocations. The split is shown in the graphic below. Free allocation continues to reduce the incentive for industry to decarbonise. 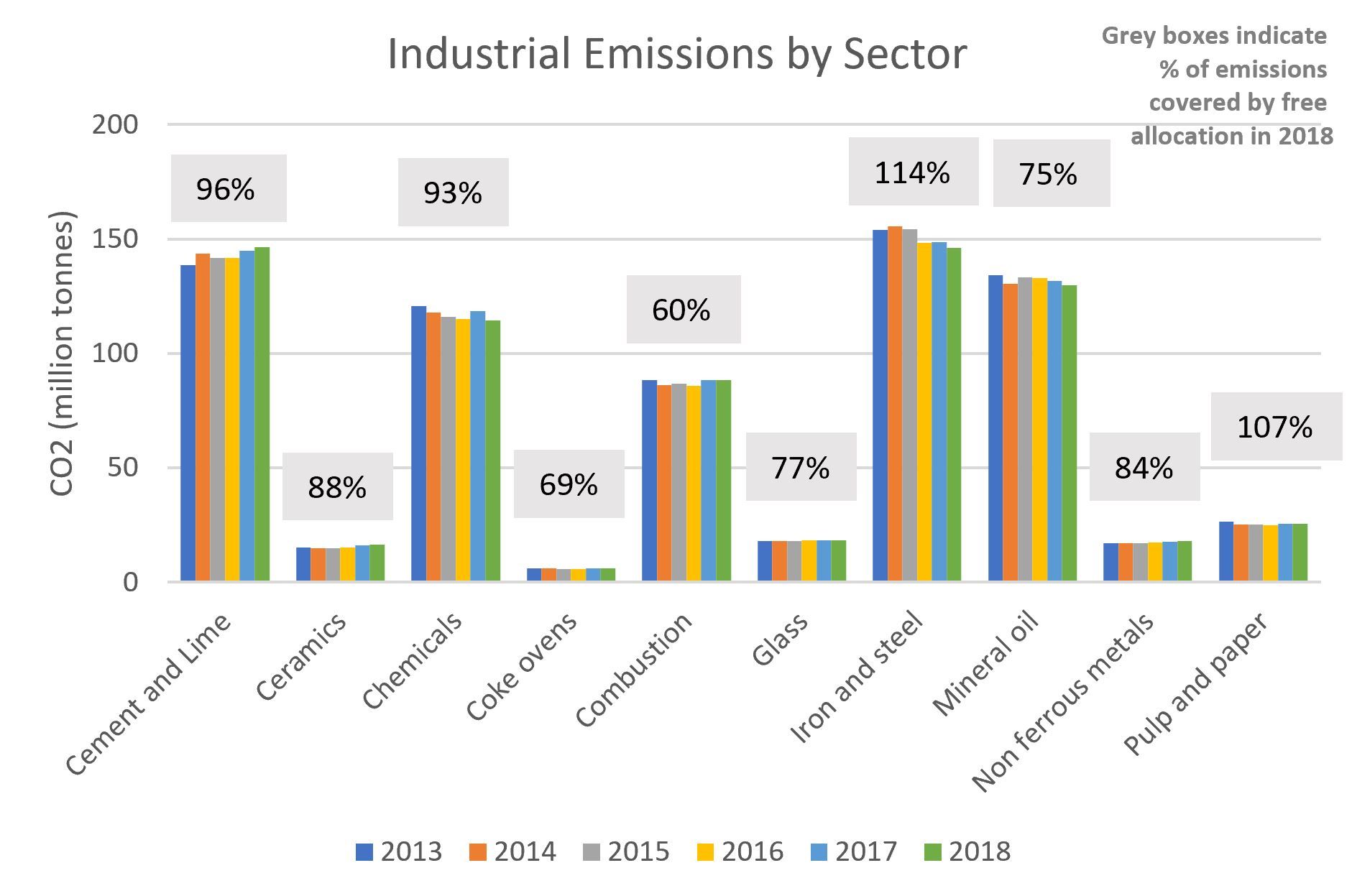