Times of change for the EU ETS

Sandbag's feedback on the upcoming revision

In just one month, Phase IV of the EU ETS will start, bringing in many changes that were negotiated during past revisions of Europe’s carbon market. But even more changes are coming down the line, as the European Commission gets ready to present another EU ETS revision next June. As EU climate policy races towards 2030 targets that are in line with the Paris Agreement goals, the EU ETS needs to catch up. As always, updating the EU ETS will be a long process, and Sandbag will be using our modelling tools and data analysis expertise to assess the different policy options and advise on the best way for the EU ETS to drive decarbonisation. Last Thursday marked the first step in the long revision process as the Commission sought stakeholder feedback on their Inception Impact Assessment for the ETS revision. Here’s an overview of the main points we raised in our feedback:

We’ve said it before and we’ll say it again: the EU ETS cap needs to be brought in line with current emission levels in order for the system to be effective. Sandbag has long been calling for a rebasing of the cap and we are pleased that this option is now being seriously considered by the European Commission.

As well as rebasing, the EU ETS cap also needs to be set on a trajectory to achieve the 2030 and 2050 climate targets. To do so, the Linear Reduction Factor (LRF) needs to be increased. To take an example from our modelling, if the cap is rebased in 2026 and brought in line with average emissions from 2023-25, then the LRF would need to be 3.7% to reach a 2030 target of –55% (where the ETS contributes 35% of that target).

The Market Stability Reserve has been an important tool for reducing the surplus of allowances in the EU ETS, but will not completely remove this surplus. Our modelling shows that a higher MSR withdrawal rate may not be the best way to tackle surplus allowances, as the amount of EUAs in circulation would fall below the MSR threshold sooner than with a lower withdrawal rate. We recommend reducing the MSR thresholds down to zero and 100 million for low and high thresholds respectively.

Set a condition to the release from the ‘reserves’

There are several ‘reserves’ which can release allowances into the market: the New Entrants Reserve, the Market Stability Reserve, the allowances not allocated for free in earlier years which are kept available in the later years, and the reserve of 25 million allowances carried over from Phase III made available to Greece. In any year, these reserves should not release more allowances than they absorb if the previous year’s emissions exceeded the cap.

Free allocation and the benchmarking system promote incremental efficiency savings while disincentivising transformative low-carbon production processes. Free allocation must come to an end, with protection against potential carbon leakage coming from a Carbon Border Adjustment Mechanism that exposes imports to the same carbon price as that faced by EU producers.

The benchmark for Combined Heat & Power (CHP) installations is currently based on the average intensity of gas plants, which does not match the reality of many CHP plants running on biomass. The heat benchmark should be changed to reflect the 10% most efficient plants, as is the case in other industrial sectors.

While the EU ETS should be fully extended to aviation and shipping, including other sectors should not be considered until reforms such as those listed above are in place.  We are currently assessing these risks and possibilities with our model, and we look forward to contributing our analysis to the policy debate as it unfolds. 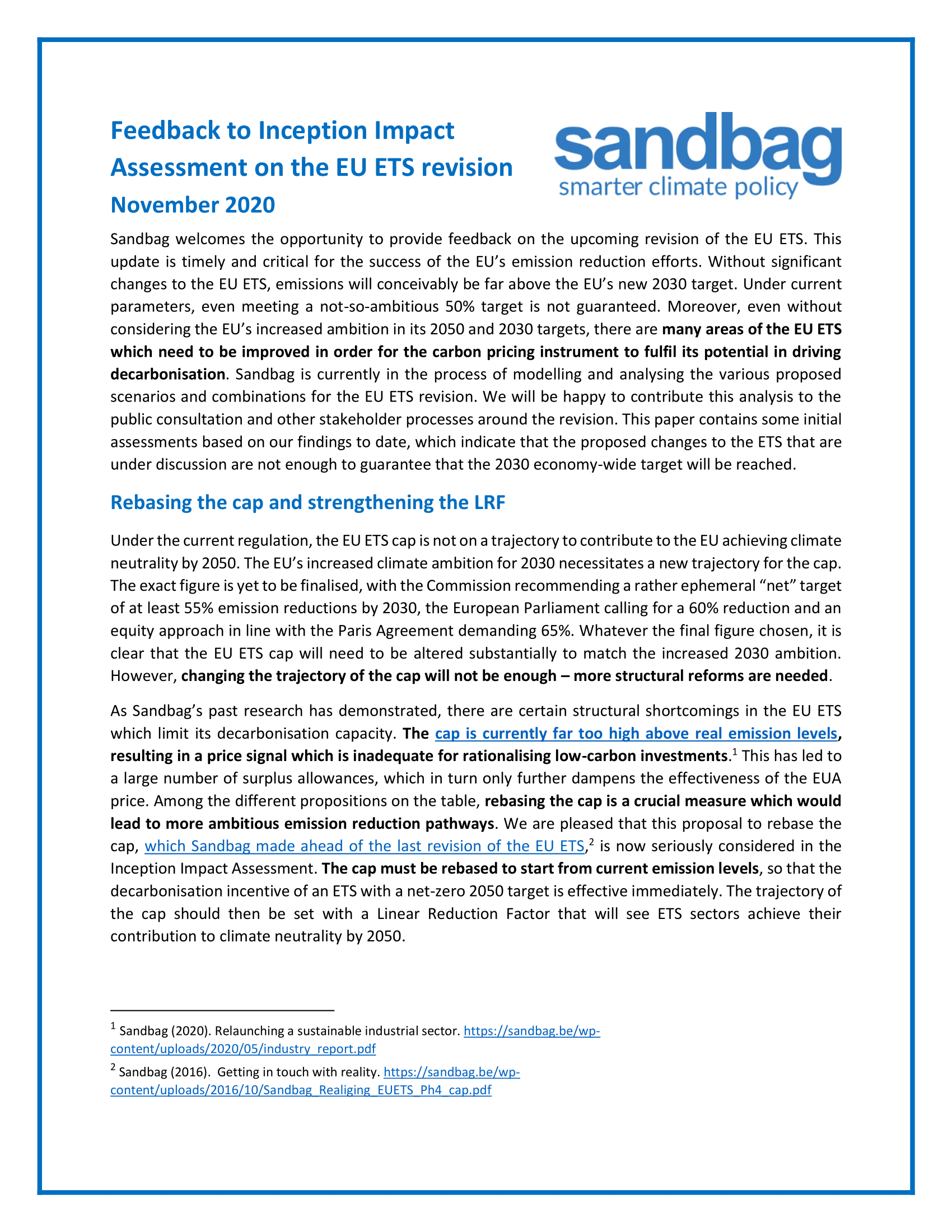 Photo by Thijs Stoop on Unsplash