While today Romania is still highly dependent on fossil fuels, the country has huge potential for renewable energy production. In the next decade, Romania can avail of significant funds to finance its energy transition. However, this potential is dependent on adequate policy frameworks and sustained political support for higher climate ambition. Sandbag’s latest briefing looks at Romania’s renewable energy potential and the EU funds available to help put that potential into practice.

On 15 Oct, all eyes will turn to the European Council for the culmination of a long debate over the EU’s 2030 emission reduction targets. Based on its detailed Impact Assessment, the Commission has endorsed a 2030 reduction target of “at least 55%” (although the inclusion of carbon removals makes the actual reduction a few percentage points lower). The European Parliament has called for a target of 60%, while the rapporteur’s original proposal was for 65%, a figure that is best in line with what scientists deem necessary to keep the rise in global temperatures in line with the Paris Agreement goal of 1.5 degrees of warming. However, amidst these calls for even higher ambition, some Member States are still to declare their support of at least 55% emission reductions by 2030. Yet the clear policy direction and strategic investment planning required by such a target would bring many economic and social co-benefits to these Member States. In our new policy briefing, we assess the case of Romania and its potential for greater climate ambition.

In 2008, Romania’s 2020 target of receiving 24% of its energy from renewable resources was enshrined into national law. In the following years, investment in energy grew by over 140%, energy production capacities from wind and solar grew exponentially, and greenhouse gas emissions dropped as a result. The support policies for renewable energy proved so successful that the 2020 target had already been achieved in 2016. Following this, however, repeated legislative changes and closure of access to the renewables support scheme meant that investment dropped and the growth of renewables capacity stagnated. Romania’s experience shows that strong policy support for clear targets are crucial for driving the energy transition and can make significant inroads into reducing greenhouse gas levels.

In the context of the rapid change required to achieve the EU’s 2050 carbon neutrality goal, an ambitious 2030 target is needed to motivate Romania’s continued transition. Despite the reductions achieved since 1990, greenhouse gas emissions remain high, and Romania is still very dependent on the import of oil, gas and coal. This is particularly the case for the residential heating sector, which gets 90% of its energy from fossil fuels. However, this overdependence on (mostly imported) fossil fuels need not be the case. Based on current technologies, Romania has the natural resources to provide a significant but as yet unrealised share of its energy from renewable sources. Geothermal and solar energy are particularly underexploited, with only 9% and 10% of their respective capacities currently being used for renewable energy generation. Coupled with energy efficiency measures, most if not all of Romania’s energy demand could be met by domestic renewable sources. Based on this techno-economic potential for renewables production and considering the further development of renewables technology over time, Romania can feasibly achieve carbon neutrality by 2050. However, reaching this goal in three short decades requires strategic planning of carbon-neutral investments now.

Fortunately, the funds to support these strategic investments are also readily available now. Romania and its fellow Member States can avail of a variety of EU instruments to fund their energy transition. Under the 2021-2027 MFF, Romania can secure over €6bn through funds such as those designated for sustainable development and the Just Transition. The Commission estimates that the country could access approximately €30bn in loans and grants through the Recovery and Resilience Facility. Another important source of funding is the EU ETS, with its auctioning revenues and Modernisation Fund, from which Romania could generate revenues of over €15bn over the next 10 years (and this based on a relatively low carbon price of €28 per tonne). Compared to the €22bn in investments which the Romanian National Energy and Climate Plan says the energy transition will require until 2030, it is clear that the country has the means to finance an ambitious energy transition. Paired with its technical potential for renewable energy production, Romania could be placed to become a leader on climate action. All that is missing is the political will to embrace a far-reaching 2030 target – it remains to be seen whether that political will can be found during this week’s summit. 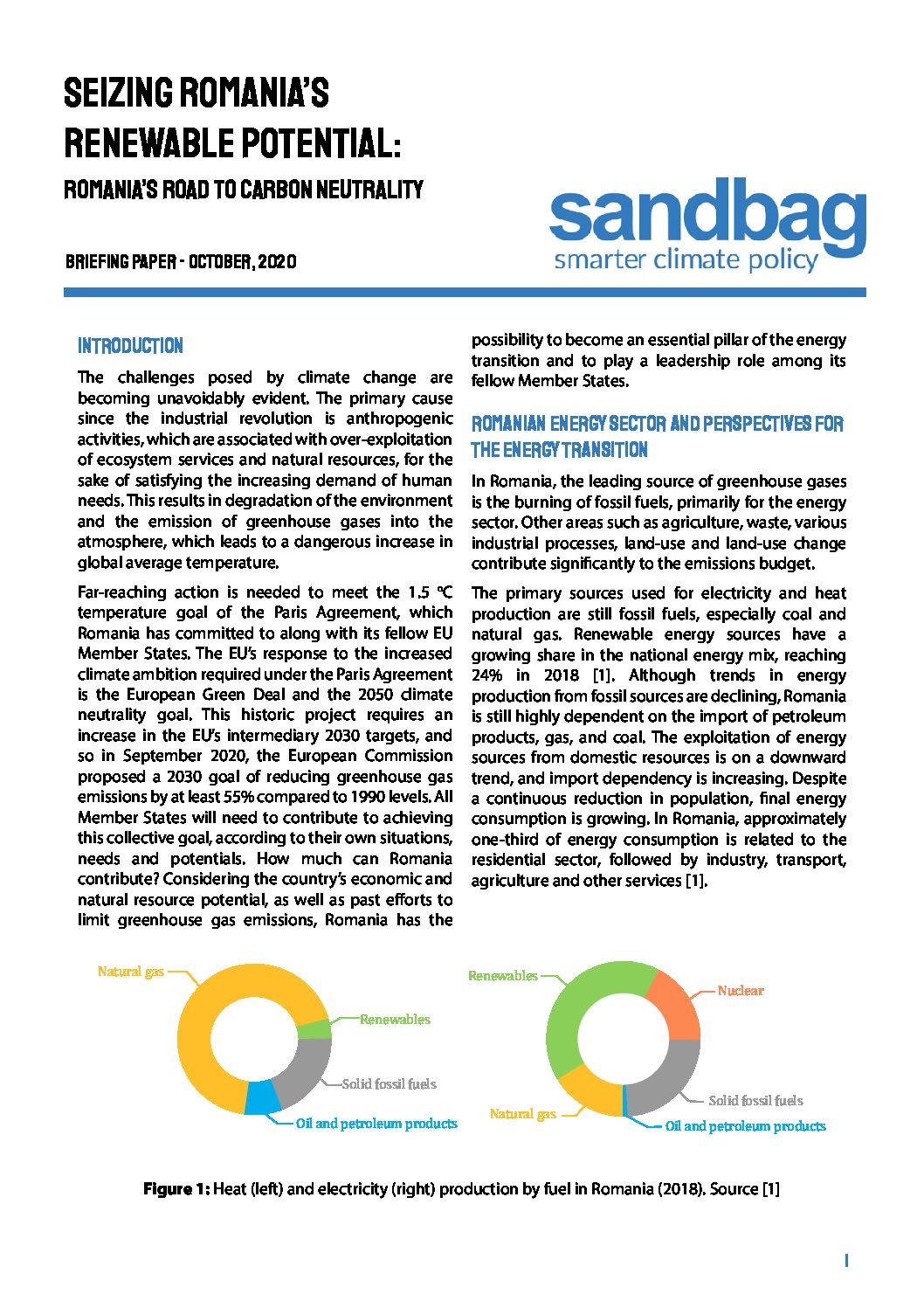 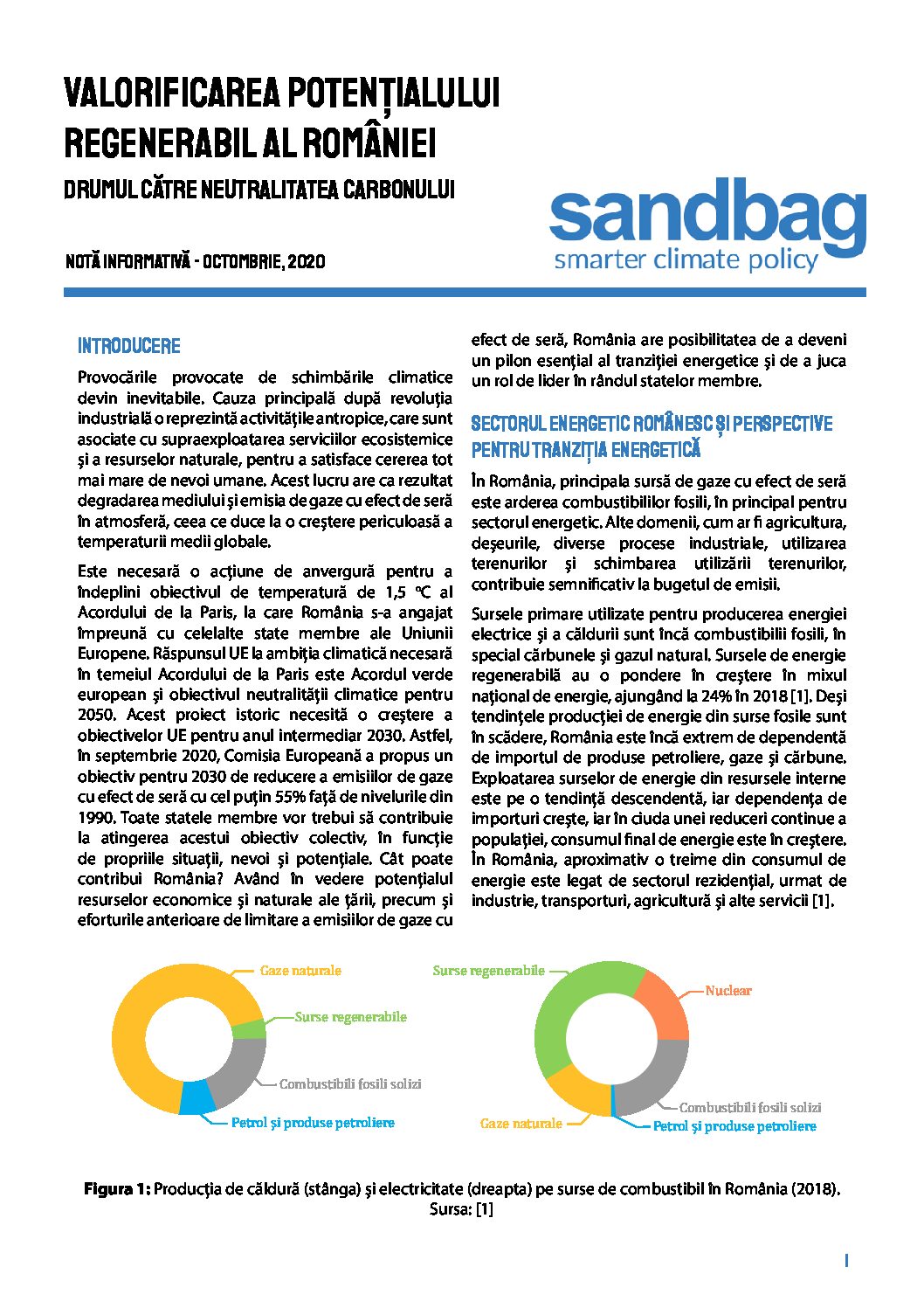