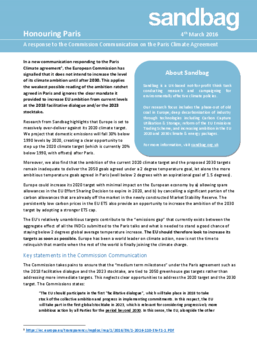 In a new communication responding to the Paris Climate agreement, the European Commission has signalled that it does not intend to increase the level of its climate ambition until after 2030. This applies the weakest possible reading of the ambition ratchet agreed in Paris and ignores the clear mandate it provided to increase EU ambition from current levels at the 2018 facilitative dialogue and/or the 2023 stocktake.
Research from Sandbag highlights that Europe is set to massively over-deliver against its 2020 climate target. We project that domestic emissions will fall 30% below 1990 levels by 2020, creating a clear opportunity to step up the 2020 climate target (which is currently 20% below 1990, with offsets) after Paris.
Moreover, we also find that the ambition of the current 2020 climate target and the proposed 2030 targets remain inadequate to deliver the 2050 goals agreed under a 2 degree temperature goal, let alone the more ambitious temperature goals agreed in Paris (well below 2 degrees with an aspirational goal of 1.5 degrees).
Europe could increase its 2020 target with minimal impact on the European economy by a) allowing spare allowances in the EU Effort Sharing Decision to expire in 2020, and b) by cancelling a significant portion of the carbon allowances that are already off the market in the newly constructed Market Stability Reserve. The persistently low carbon prices in the EU ETS also provide an opportunity to increase the ambition of the 2030 target by adopting a stronger ETS cap.
The EU’s relatively unambitious targets contribute to the “emissions gap” that currently exists between the aggregate effect of all the INDCs submitted to the Paris talks and what is needed to stand a good chance of staying below 2 degrees global average temperature increase. The EU should therefore look to increase its targets as soon as possible. Europe has been a world leader on climate action, now is not the time to relinquish that mantle when the rest of the world is finally joining the climate charge
Press clipping:
9th Mar: Climate Home
Skills Posted on