The Tipping Point for the EU Electricity Transition

It is the fourth year in a row that we have made this annual review; the second year in a row with Agora Energiewende. It is a timely analysis to piece together all the data on what happened in Europe in electricity in 2017.

The reports celebrates how the wind, sun and biomass overtook coal, in supplying electricity across Europe in 2017, but also highlights some of the failings of the current electricity transition.

Please find below a graphic of the report’s five key findings.

“Our study gives a very mixed picture: EU renewables has been increasingly reliant on the success story of wind in the Germany, UK and Denmark, which has been inspiring. But other countries need to do more. Solar deployment is surprisingly low, and needs to respond to the massive falls in costs. And with electricity consumption rising for the third year, countries need to reassess their efforts on energy efficiency,”
“But to make the biggest difference to emissions, countries need to retire coal plants. We forecast Europe’s 258 operational coal plants in 2017 emitted 38% of all EU ETS emissions, or 15% of total EU greenhouse gases. In 2017, Netherlands, Italy and Portugal added their names to the list of countries to phase-out coal, which is great. We need a fast and complete coal phase-out in Europe: the thought of charging electric cars in the 2030’s with coal just doesn’t compute. A 35% renewables target would make a 2030 coal phaseout possible.” 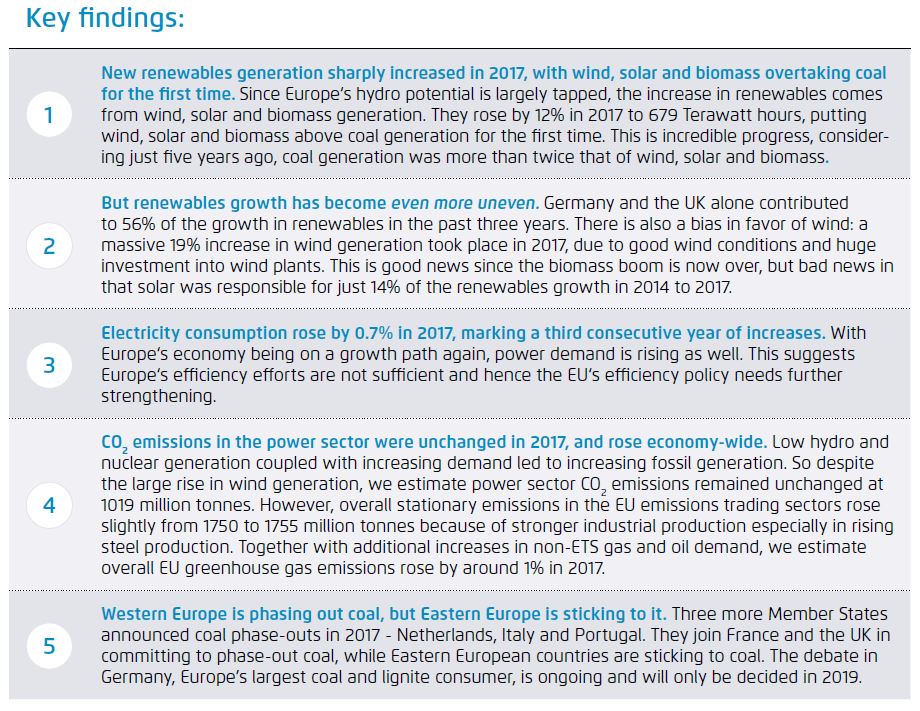