On 12th May, the Commission for the first time published the scale of the ETS surplus[1].  This is the first time this has been published by the Commission since phase 2 started in 2008.  We welcome the clarity this brings.
According to the Commission, the ETS surplus was 1695MT at the end of 2016.
But was it?  The Commission uses actual data from their database as at 1 April.  It’s great this data is available, but it is often incomplete, and therefore adjustments always need to be made.  We think their 1-April data missed about 139MT of emissions that had not submitted by then, the CER number has since been confirmed since as 14MT higher, and also missed the 10C allocations which will be allocated for 2016 and we estimate at 98MT.  These numbers, helpfully for the Commission, partially offset each other. Interestingly, it is the first time the Commission has announced cancellations, which it says is 0.2MT.
Sandbag has been at the forefront of estimating the surplus for several years.  We last published our surplus on 1-April [2], and this morning we have updated our new 2016 data, and also assumed the Commission’s number for phase 2 carry-through (although we are not sure why it is very slightly different from our calculations).  These cumulative tweaks have adjusted our surplus projection slightly by around 55MT, since our last surplus forecast on 1-April.
This means Sandbag’s latest view is of a surplus of 1668MT by end-2016 excluding aviation, and 1595MT including aviation (see table below).  This is, we believe, a more accurate forecast than the Commission, and our ability to closely reconcile with the Commission’s numbers demonstrates confidence in our surplus forecasts.

Sandbag began forecasting the future surplus in October 2014 in our landmark report “Forecasting the ETS surplus to 2020”.   We then forecast the ETS surplus would rise to 4500MT by 2020[3], because of how fast power sector emissions were falling due to renewables and falling electricity demand.
How does our Oct-2014 forecast compare the surplus now?  Well, our forecast of emissions over 2013-2016 was only 1% wrong (we over-forecast energy efficiency).  We believe the total surplus including the MSR will rise to around 4000MT by 2020.  This is slightly less than the 4500MT originally envisaged back in October 2014, because energy efficiency is not happening as aggressively as we envisioned[4].
Our October 2014 forecast of the 2016 surplus was 1942MT, compared to the surplus now of 1663MT, a difference of just 14%.  Our biggest mistake was over-estimating the supply coming to market, by under-estimating the amount of “partial cessations”.

So where next for the surplus?

What about post-2020?  If we assume the more-ambitious Council proposal is adopted, then we have a fairly good understanding of the auction and free allocations, and the main uncertainty left is emissions.  However, because the MSR varies the supply as the demand varies, the difference is not as big as you might expect:

Emissions have fallen by an average of 2.7%/year since 2005.  Coal power plants still account for 39% of ETS emissions, so with our current high projection of renewables deployment, we think our “low case” is more likely than our “base case”.
Either way, with a surplus of 1000MT or 2000MT in 2025, what might the price be then, when you compare it to the current surplus of around 1663MT?  Not much different, we imagine… 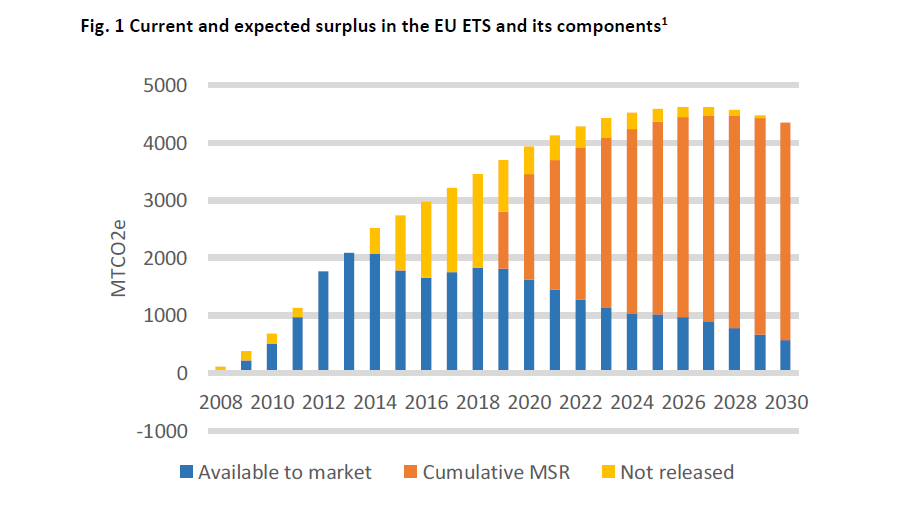 See our latest publication, “A Tale of Two Surpluses”, which explains this further[5].