Today. the March meeting of the European Council will not be discussing a response to the Paris Climate Agreement, as many had hoped. Instead, the Council has decided to focus further debate on developing a plan for tackling the migration crisis. But migration stems from a complex set of factors with climate change playing a significant role in the equation.

More than a million migrants reached Europe in 2015. Since then, the crisis has worsened, threatening to overwhelm some of the Member States least able to cope, including Greece.
And while the refugee crisis is rooted in political turmoil outside of the EU’s borders, environmental degradation and weather catastrophes contribute to increasing vulnerability of populations, adding to pressures to relocate and find protection and resources elsewhere.
In the medium to longer term, the migration crisis and the climate crisis risk will become increasingly inter-linked, a symbiosis of catastrophes. The EU cannot tackle migration without addressing its root causes which include climate change. So why not start now?
Ignoring climate change in order to focus on emergency migration policy-making will fail to address the broader context under which these forced population movements takes place. The Paris Agreement is ultimately addressing the wider global developmental context. It is a platform for global economic cooperation with a view to regulating the current imbalances tied to a carbon-intensive model of economy, which fails to account for the negative externalities which arise in the form of greenhouse gas emissions, putting the world’s population at great risk.
Sandbag urges the Council to address Paris with greater speed. Translating the urgency and ambition of Paris into further EU action on climate change will act in the long term to prevent the migration crisis from becoming truly unmanageable.

The Jungle in Calais

Recently, I visited the Jungle refugee camp in Calais. When I visited it was estimated to hold between 3,000-6,000 people, including hundreds of unacompanied children, but has since been partially bulldozed by the French authorities, with some inhabitants moving to government-provided shipping containers but most to other makeshift camps nearby. The refugees I talked to came from Syria, Afghanistan, and Sudan. The problems which forced them from their homelands are multifaceted, but especially in the case of Syria and Sudan have been suggested to have had a strong climate change dimension, which may have exacerbated underlying political instability.
In Sudan, desertification has led to food scarcity, while Syria has experienced an unprecedented drought. Whilst the relationship between migration and climate change is difficult to determine as one of causality or mere correlation, the truth remains that increasing extreme weather undermines the healthy functioning of society.

Making the links
Many have linked the Syrian civil war and subsequent surge in refugees with the unprecedented drought, likely exacerbated by climate change. Kelly, et al. (2014)state:

There is evidence that the 2007−2010 drought contributed to the conflict in Syria. It was the worst drought in the instrumental record, causing widespread crop failure and a mass migration of farming families to urban centers.
Century-long observed trends in precipitation, temperature, and sea-level pressure, supported by climate model results, strongly suggest that anthropogenic forcing has increased the probability of severe and persistent droughts in this region, and made the occurrence of a 3-year drought as severe as that of 2007−2010 2 to 3 times more likely than by natural variability alone. We conclude that human influences on the climate system are implicated in the current Syrian conflict.

Attribution of weather events to climate change is difficult because its manifestations are not geographically confined to the sources of GHG emissions but dispersed at a global level. However, as modelling improves, scientists are becoming more confident at direct attribution.
Attributing specific migration paths to weather events is more difficult again. Links are stronger between changes in climate and internal displacement, rather than international migration, for which there is poorer quantitative evidence. We do know that the number of internally displaced people is by far greater than the total number of refugees at the global level.
In summary, direct links between climate change and migration are hotly disputed because of the difficulty in confirming every step in a chain of causality with many contributing factors. Conflicts and migration can rarely, if ever, be attributable to a single cause, but climate change appears to be playing a growing role. UNHCR sums up the basic case:

Scarce natural resources such as drinking water are likely to become even more limited. Many crops and some livestock are unlikely to survive in certain locations if conditions become too hot and dry, or too cold and wet. Food security, already a significant concern, will become even more challenging.
People will have to try and adapt to this situation, but for many this will mean a conscious move to another place to survive. Such moves, or the adverse effects that climate change may have on natural resources, may spark conflict with other communities, as an increasing number of people compete for a decreasing amount of resources.

The climate and migrant crises must be tackled together
Talking to refugees and volunteers in the Calais Jungle paints a picture of how the world will develop if the climate crisis is allowed to take hold. Complex overlapping issues of wars, drought and climate disruption, and at root, inequality, are building to a refugee crisis that will dwarf 2015.
To overcome the migration crisis, EU leaders must urgently address climate change. Targets must be raised following Paris, which as Sandbag has shown, is easy to do thanks to falling electricity demand and emissions. Difficult Member States must be faced down. Clean energy and innovative technology must be funded to help industry decarbonise. True leadership is reflected in the ability to foresee and plan for the future. It is short-sighted to imagine tackling climate change can wait.
The migrant and climate crisis are complex, interlinked, and Europe must not shy away from tackling them. The moment to do this is now; any postponement will further exacerbate both. 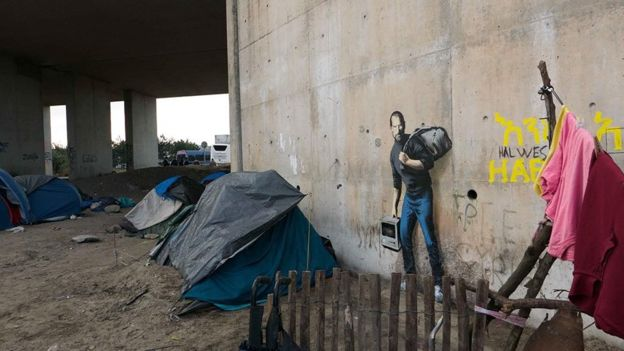